Returning to this series with Spirited Away feels like standing on a grassy hill at sunrise and taking a deep relaxing breath.  Spirited Away was, in fact, my very first exposure to anime.  Long before I fell in love with the likes of Cowboy Bebop, Sword Art Online or Naruto, young Chihiro was like my guide into an unknown world of story telling, wonder and art.  It’s perhaps because of this fact that upon rewatching the film for this article, a film which I have seen countless times, I once again broke into tears as Chihiro realized Haku’s real name.  Spirited Away is the kind of film which is moving on a deeply personal level no matter how many times you watch it.  I can’t explain everything that makes this masterpiece come to life.  But I’m going to at least try to hit on some of my favorite points.  Welcome back to Vault Ghibli.  Let’s jump in. Spirited Away was not a cult film or an indie classic.  It smashed box office records and became the highest grossing film in Japan.  Before even going international, it had already demolished the $200 million wall.  Thanks to a partnership with Disney’s Buena Vista, it also became a worldwide phenomenon and many people that never watch anime or know its sub-culture will probably at least know of this film.  The film was even recognized by critics, winning the Golden Bear award at the Berlin Film Festival and even an Oscar for Best Animated Feature.  To this day, people can still be seen walking around with clothes and key chains from the film, and I dare you to go to a game, anime or comic convention and NOT see at least five ‘No-Face’ cosplayers walking around.

Hello sir, we’re looking for the panel room where they’re holding the Q&A with the Dragon Ball voice actors?

Spirited Away’s success is undoubtedly earned.  If you haven’t seen it, GO WATCH IT, but for now I’ll at least give you a rundown.  Chihiro’s family is moving to a new town, and much like the flowers her friend gave her, her past life is wilting away.  She misses home and is not excited about the prospect of a new one.  Her parents get lost on the way and they all come upon an abandoned theme park.  Chihiro leaves her parents to stuff themselves with food while she explores, only to learn that they have stumbled onto a Spirit world bathhouse.  At the request of Haku, a young man she meets, she goes to leave, but finds that her parents have been turned into pigs.  Now she must learn to live and survive in this terrifying new world if she hopes to see her parents again and escape.

There’s a shocking sense of wonder in this film, and it could all very well be overwhelming, but luckily we are introduced to it through the eyes of Chihiro who’s childlike senses give her the ability to not pre-judge the world around her.  Sometimes the kindest looking people or creatures are the scariest.  Sometimes the scariest monsters are the kindest and thanks to Chihiro we are able to see all of that.  Unlike many Disney films, Spirited Away is a bit of a horror story.  After all, Chihiro not only faces physical harm, such as being eaten, but also a metaphysical attack as the bathhouse owner Yubaba, steals her name, renaming her Sen, and slowly peels away at her identity and who she was before she entered the Spirit world.

Gimme all your money…and your memories…and your name!!!

What always resonates with me in this film is the sheer amount of depth poured into every single one of these characters.  Haku is actually a dragon.  Yubaba is full of evil, but also cares for her baby, a gargantuan infant who just wants to be played with.  No-Face, a seemingly kind soul who feeds into the greed of others, is actually just looking to be accepted.  An enormous stink spirit turns out to be the very essence of water, polluted to the point of being unrecognizable.  When I watch Spirited Away, I often think back to reading books in High School.  Every moment of this film seems to have a deeper, valuable lesson to be learned.  So much so, that I see something I never saw every time I watch it.

This week on The Biggest Loser…

At its very core, Spirited Away is a film about growing up and learning the lessons that our parents never could.  It’s about a new generation being wiser than the last.  After all, when you really think about it, her parents gain absolutely no wisdom from the events of the film.  They leave the spirit world just as clueless and ignorant as when they entered.  Chihiro, however, has a new sense of love for her life, and an appreciation for the world around her.  She’s stronger than she once new and she’s gained a worldview that her parents could only dream of.  Because of this, the film, while horrific at times, leaves us on a note of hope and belief that tomorrow will be better than today.  It’s more powerful than most films on the market, let alone most that are animated. Ugh, elevators.  Am I right?

But even without all of these deeper meanings and hidden lessons, Spirited Away would still be dazzling.  The film is the culmination of Miyazaki’s career up to this point.  Filled to the brim with fascinating creatures, both big and small, it’s hard to look away while watching the film as you feel you might miss something.  Every frame of this film oozes with not only imagination, but masterful artwork.  After all, most of it was hand drawn as the film uses a very small amount of CG to create its canvas of wonderment.  And as long as we’re talking about artistry, we have to give a special nod to Joe Hisaishi who delivers one of the most beautiful, intricate and haunting soundtracks of his career.  Listen to it late at night or early in the morning while doing absolutely nothing else and I double dog dare you not to be moved to tears. 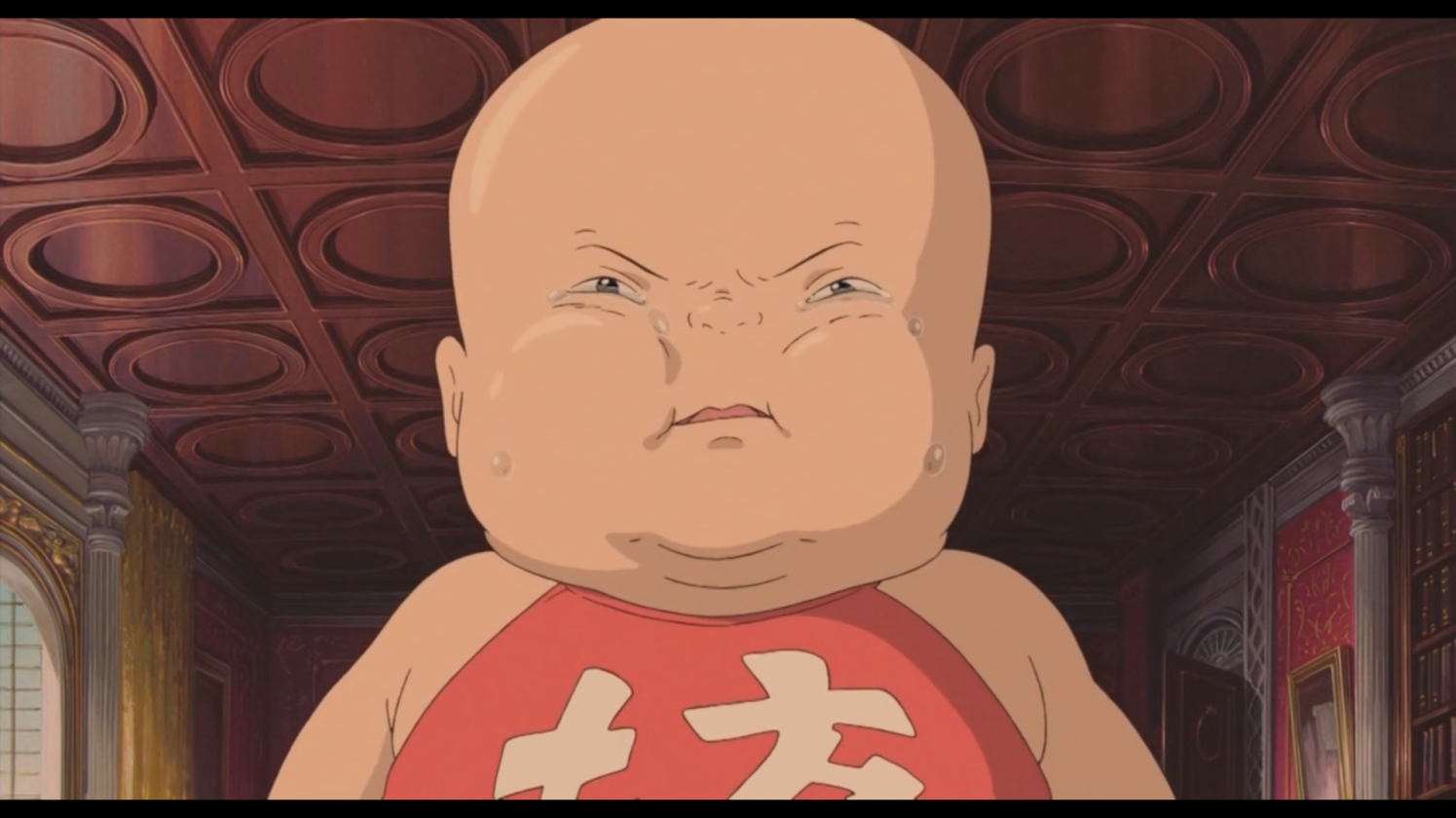 These aren’t tears!  I just have something in my eye!

There’s simply too much to talk about in one article to do this film justice.  If you’ve seen it, you know it’s perfect.  If you haven’t, you owe yourself a movie night with this one.  It’s absolutely brilliant.  It’s become second nature for Miyazaki at this point, but after this film, he declared his retirement and it’s easy to see why.  So much work and love and care was poured into this film.  Its the sort of movie you finish watching only to want to start it from the beginning and watch it again.  Its the sort of film you share with your friends because they simply have to see it.  It transcends animation and becomes something that sticks in your heart for years to come.  I yearn for the day when my kids can watch it and look at me as the silly parent stuck in his ways while they hope for an even better future.  After all, Spirited Away is timeless and much like Snow White is still relevant years after its release in 1938, something tells me that a hundred years for now, we’ll still be talking about that brilliant classic, Spirited Away. Due to train traffic, this train will be arriving no where, never.

Special Note:  Thanks to everyone for waiting so long for this one.  This blog is going to be going through some big changes, or at least I hope so, in the coming months.  But this is one series I very much plan to see through to completion.  Thank you for sticking with me through all of this and I hope you enjoyed the return of Vault Ghibli.

NEXT UP:  The Cat Returns