Pandora: The World of Avatar – Review

If I’m being honest, Pandora is landing at Disney’s Animal Kingdom at a strange time.  After all, the Avatar movies don’t really have any buzz at the moment and even as I discussed the park with friends, I found that many people I knew hadn’t even seen the first film.  It’s a series that doesn’t have an enormous following, despite the success of the film.  That being said, I went into Pandora knowing full well that this was a pretty massive risk for Disney.  Yet, being the Disney fan that I am, my hopes were high as I crossed the bridge into the new land.  What I found there was a small patch of heaven which takes many of Disney’s old tricks and adds some very impressive new bells and whistles onto them to create a one of a kind, albeit short, experience.  Read on for my full thoughts on Pandora: The World of Avatar.

As I passed by another guest who was taking a photo of the same gorgeous pond I was, I heard him say to his wife “You can’t take a bad picture here.”  And he was very right.  The world is stunning and very much out of this world.  The land itself is quite small.  Granted, I was fortunate to go in a preview and the lines and crowds were super minimal, but even so, this is not an area that you will spend the entire day in.  Though it is small in size, however, it makes up for it in scope.  Every inch of this land is covered in absolute gorgeous scenery and even though much of Pandora is inhabited by man made life, it all feels very real and organic. 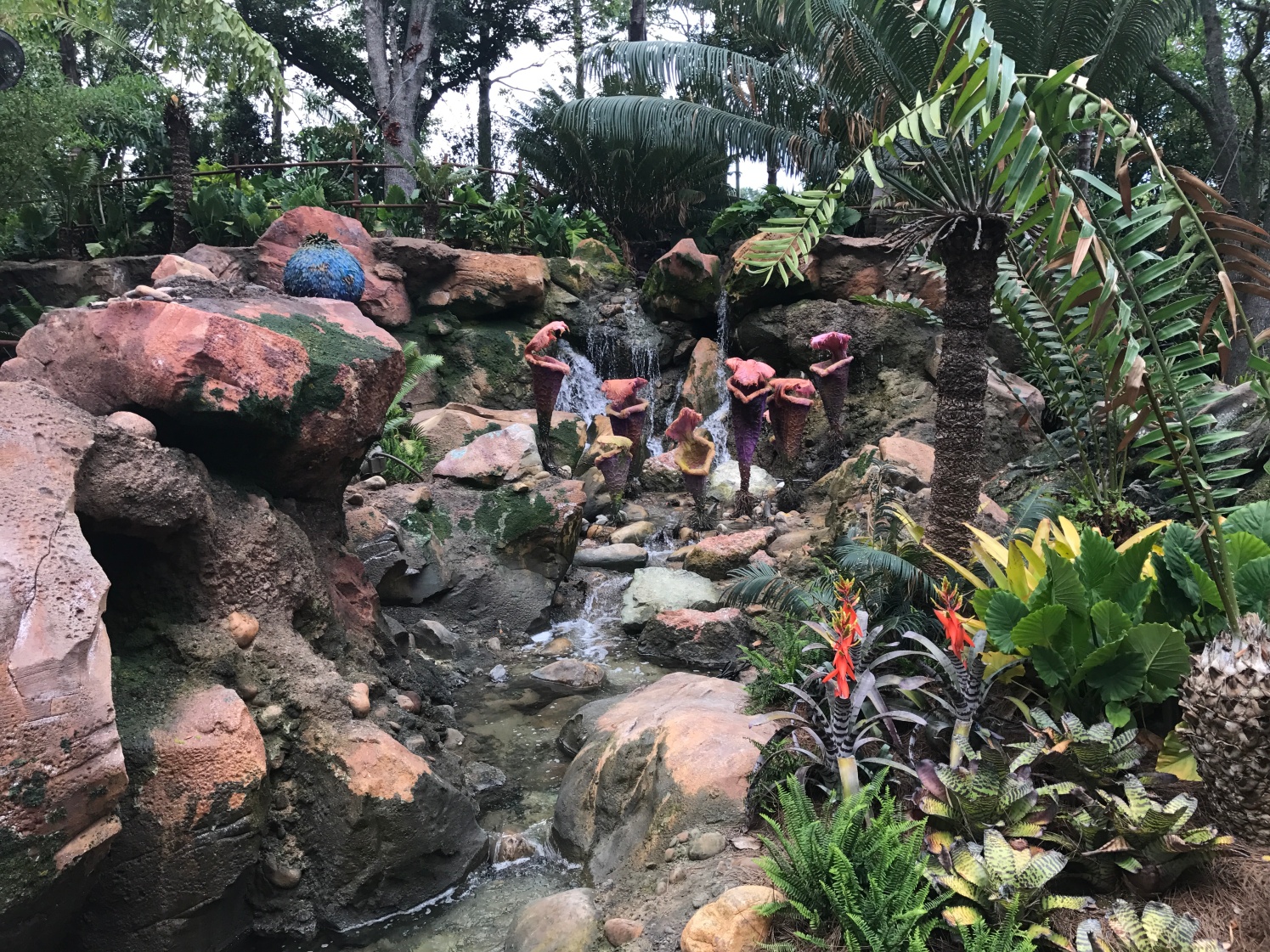 There are just so many great touches.  Yes, the floating mountains are absolutely gorgeous and I’m not ashamed to say that I took photos of them from every angle I could think of.  Here are a few. 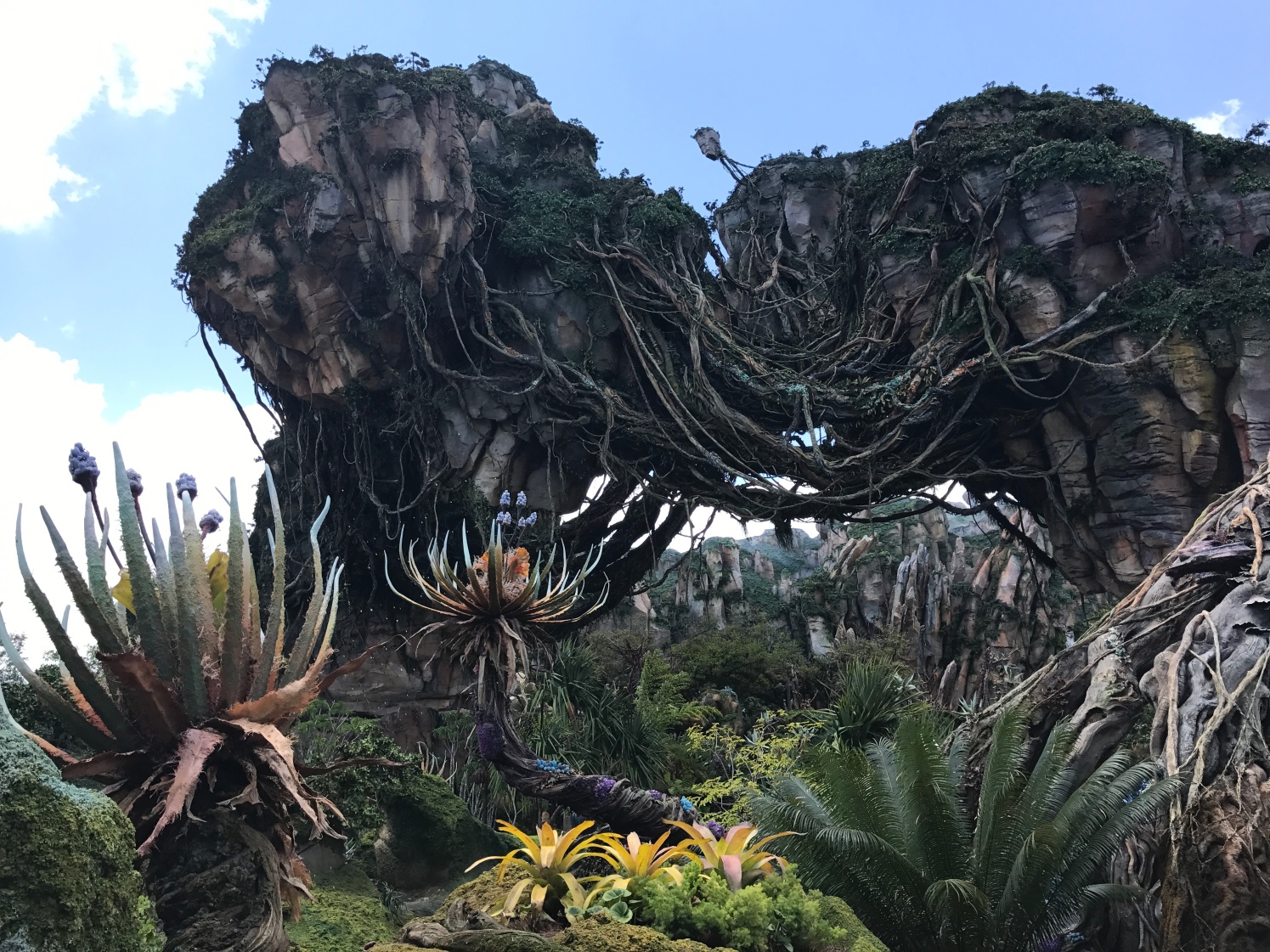 Yet, slow down a bit and you’ll find ponds filled with creatures which spit water into the air, or little patches of beautiful foliage and miniature waterfalls.

You can even take a photo with a very impressive looking mech or a plant which purrs when you pet it.

Everywhere you look, there’s something to gawk at and even though I walked back and forth in the area several times, I still managed to find new gems to photograph.  If you’re looking for some amazing family photos, look no further, you will find them here.  An amazing touch to this was certainly the soundtrack which makes you feel as though you are in a jungle full of animals that you don’t recognize.  It does an excellent job of sweeping you up in this world very quickly.

Of course, a new area in a theme park wouldn’t be much to talk about if not for the rides.  There are two here and I am happy to report that anyone can ride either of them.  No roller coasters here, these rides are more about the spectacle.

The calmer of the rides is the Na’vi River Journey which has you take to a boat as you explore a forest at night.  The effects here are top notch and I road it twice just to make sure I saw everything I could see.

The effects really make it feel as though wild beasts are all around you and it’s easy to get lost in the nature, pointing and gawking at everything around every corner.  And while the CGI effects that make these animals come to life are top notch, the most impressive part of the ride is an animatronic Na’vi at the end of the ride which is by far the best quality animatronic that Disney has EVER come up with. 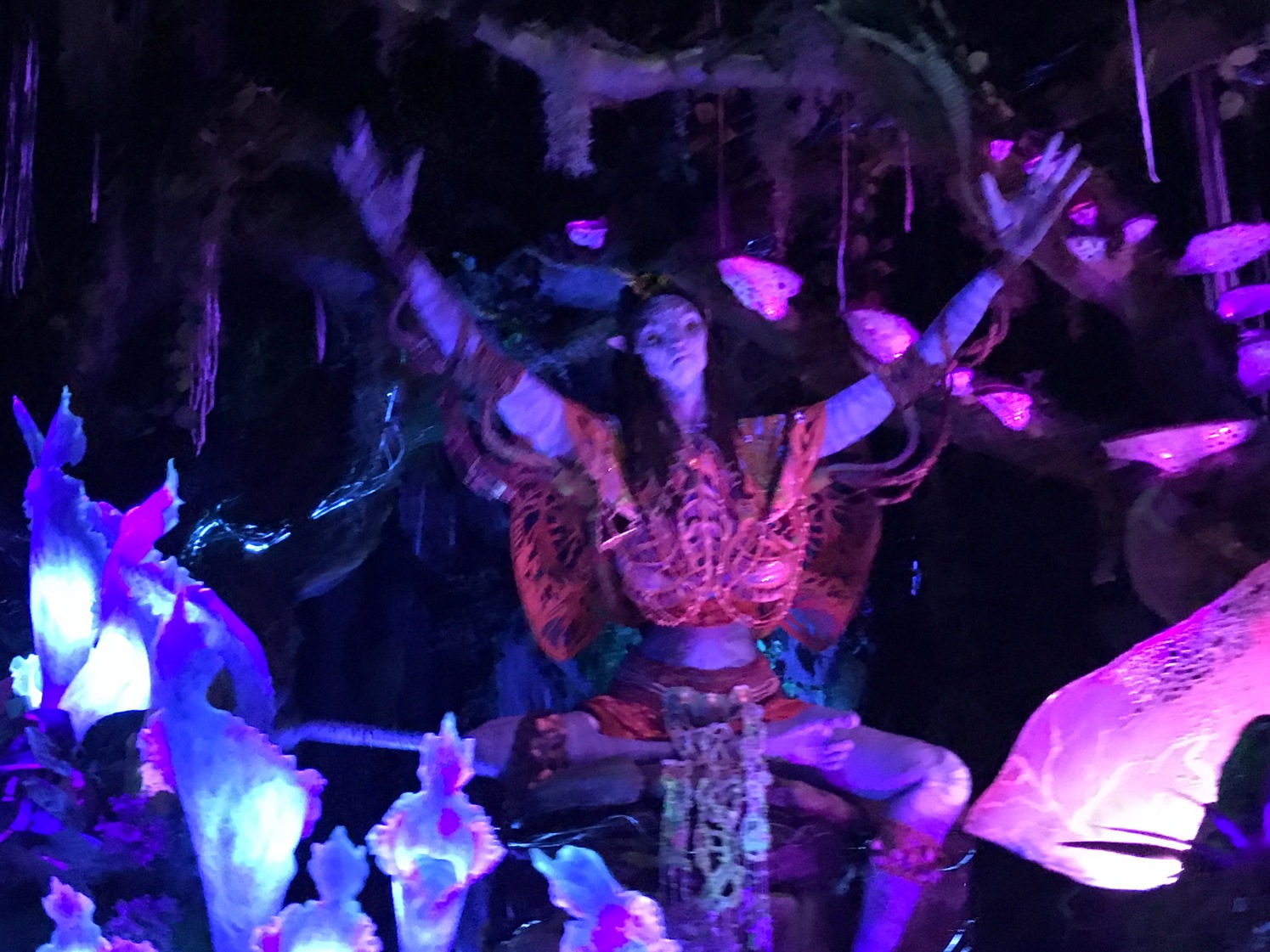 The ride is calm, but it’s a sight to behold and it says something that the moment I got off of it, I wanted to go again, just to see what I had missed the first time around.

Flight of Passage is already one of my favorite rides in all of Disney or even Florida.  The ride kicks off by having you learn all about what it means to connect with an Avatar and how the flight on the back of a Banshee is considered a right of passage. 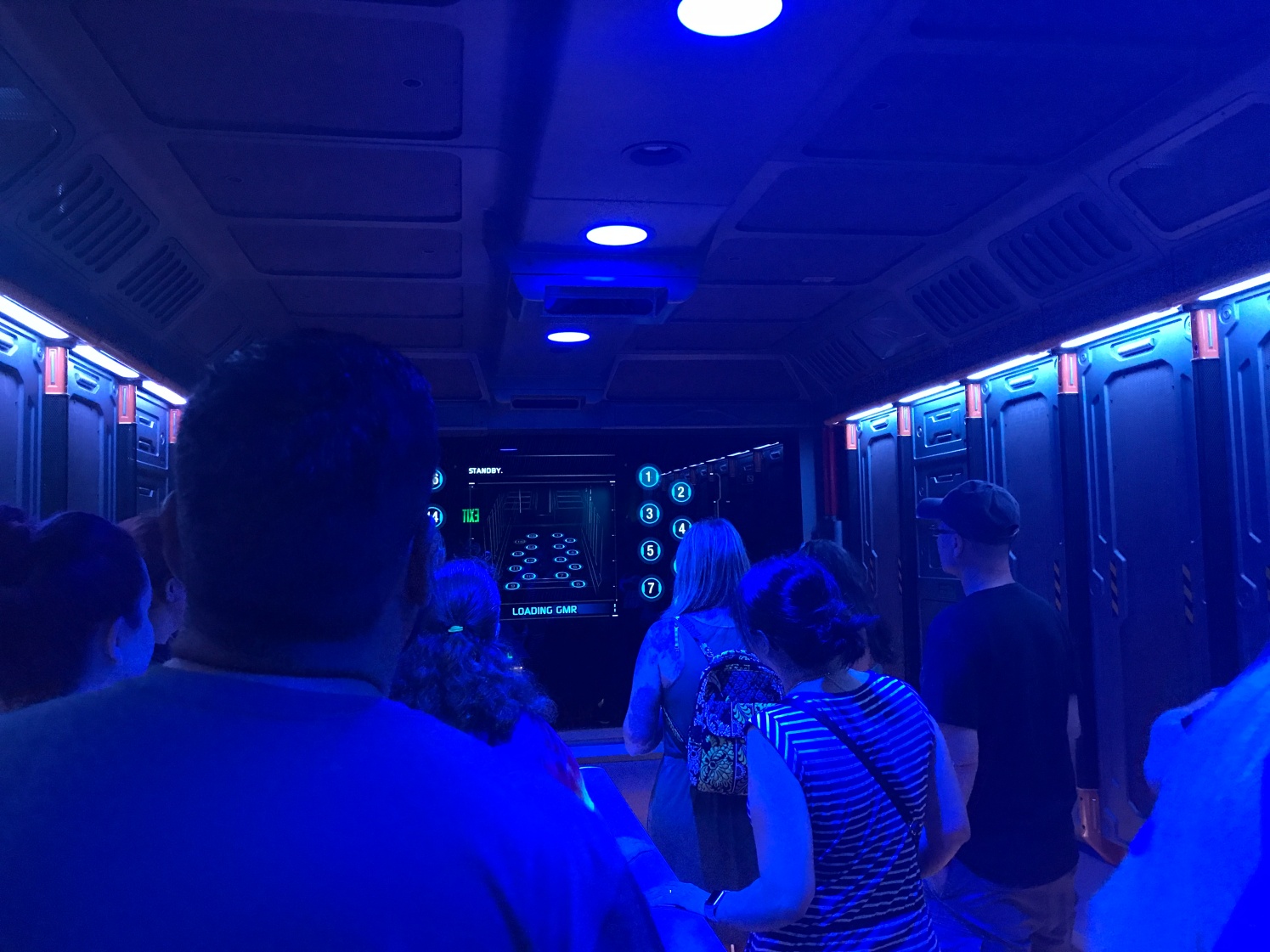 There’s a lot of set up here as you work your way along a very long queue which snakes around and introduces you to the sciency side of the Avatar universe. 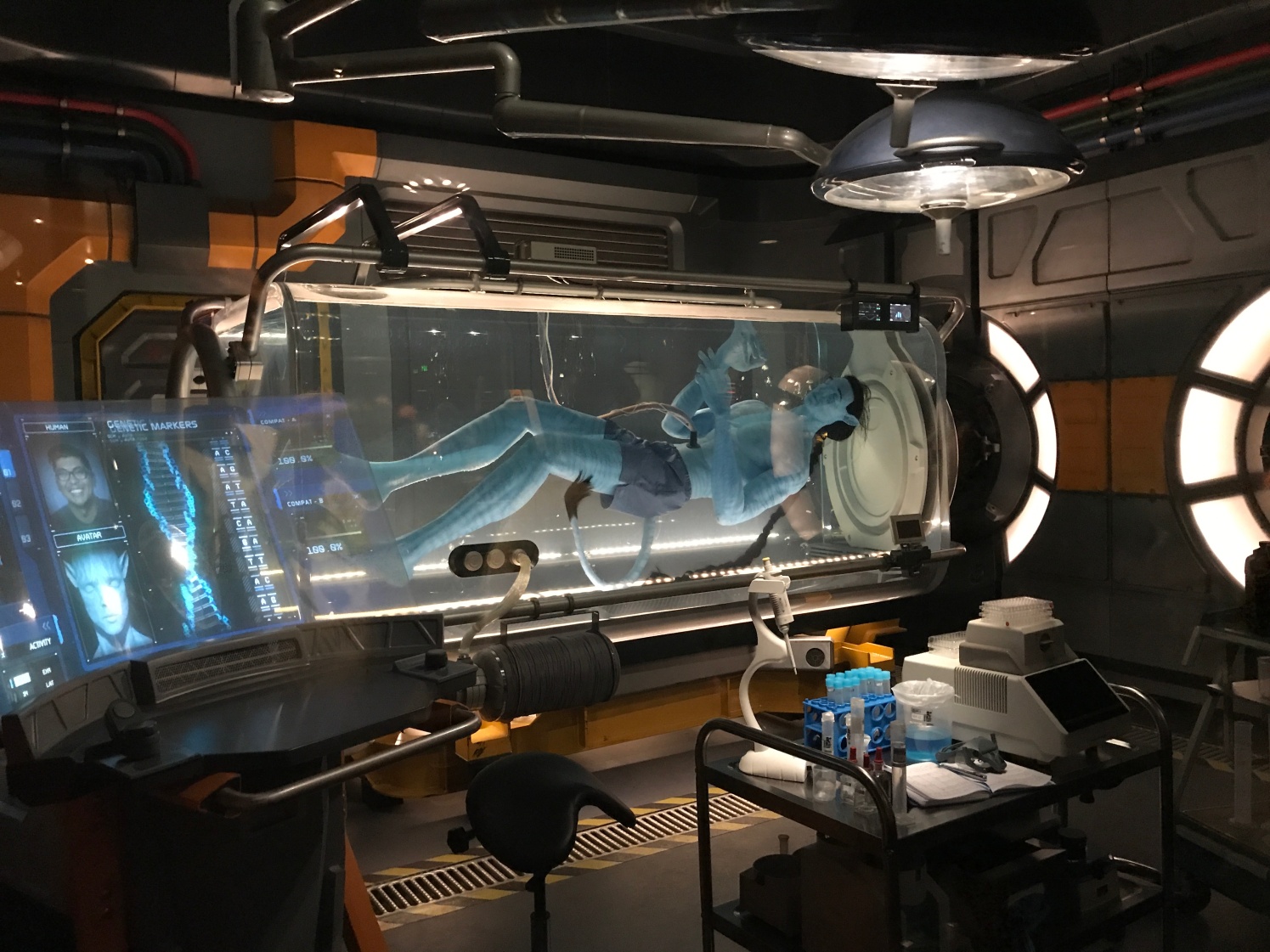 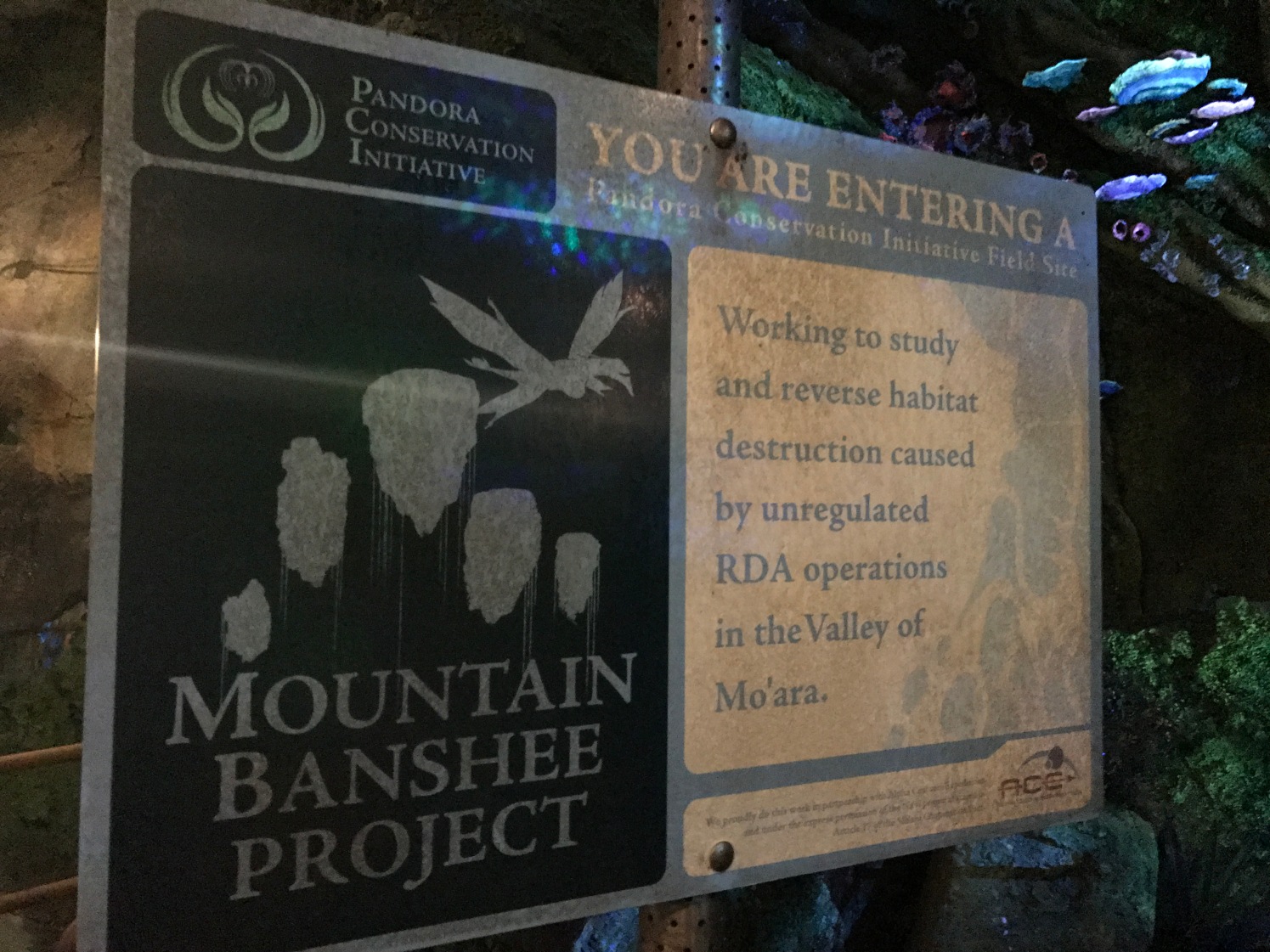 And while it IS a lot of setup, it really added some gravity to the ride we were about to take.  The ride works, in many ways, like Soarin’ at Epcot.  You straddle a bike and a support holds you in place, making you feel as though you are hooking into the Avatar.  Then, wearing 3D glasses, you take off on the flight on the back of the banshee.  The flight itself is breathtaking and so absolutely beautiful that, much like at the end of Soarin’, I teared up a bit.  Yet, despite how incredible this whole affair was, my favorite detail was an inflatable bag in between your legs which expands and collapses, making it feel as though you can actually feel the Banshee breathing beneath you.  The experience is top notch and fantastic in every way.

The shopping options in Pandora are fairly limited, but there are some standout items.  In particular, it took everything in me to not purchase a Na’vi tail.  One high point of the shopping excursion is the chance to adopt a baby banshee.  This involves going into the rookery and bonding with one.

After you choose one, you get to learn how to operate it and then you have to take an oath in order to promise to care for it.  I am glad to say that I was the only adult among children doing this and it was hilarious and adorable.  That said, I’d like you to meet Harold, my Banshee pet.

There are also lots of exclusive stuffed toys and a chance to customize your own Avatar.  Much like the area itself, the store is small but packs a punch.  Here’s my haul from my first visit to Pandora. 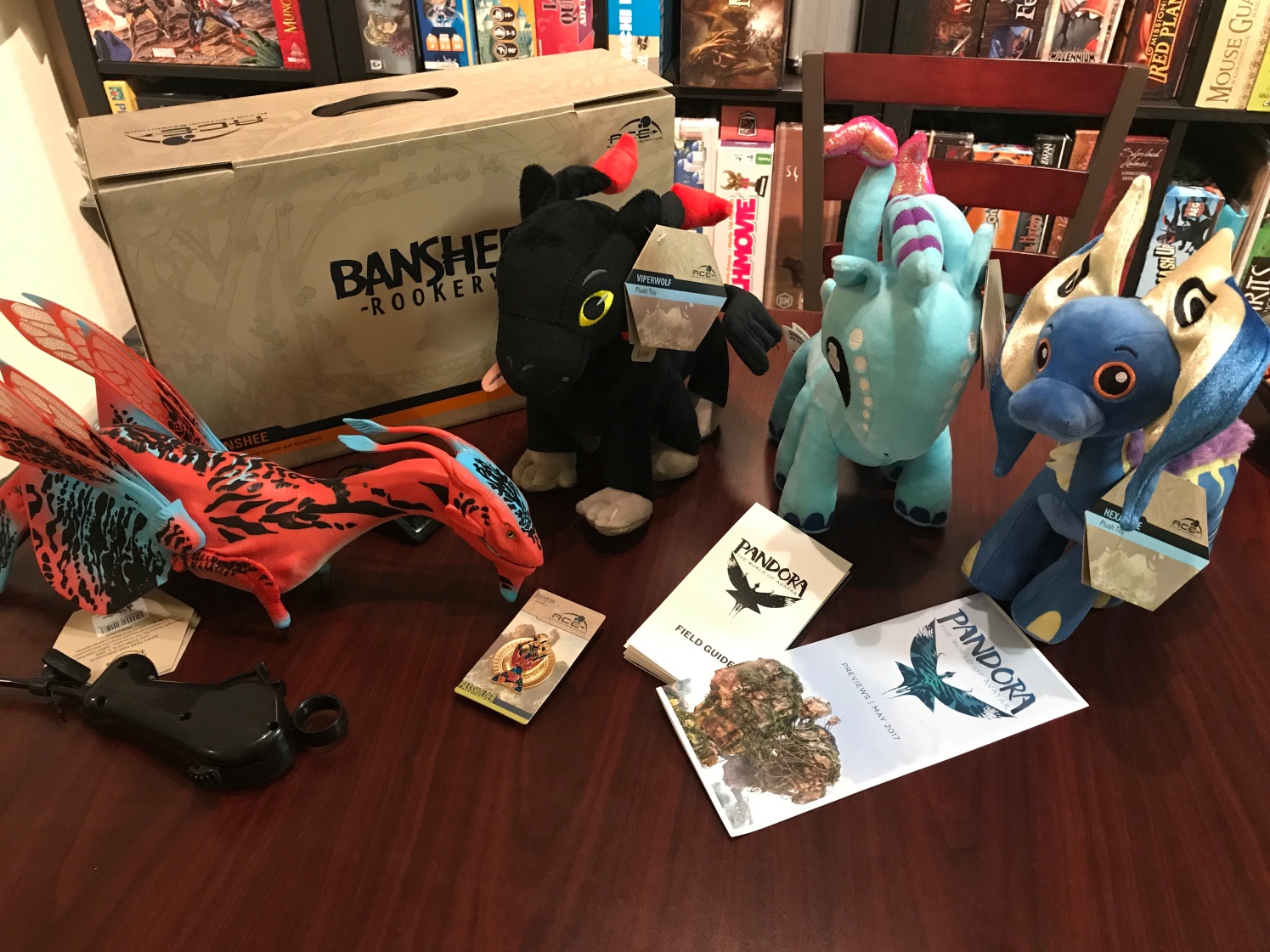 There are two Dining option in Pandora.  One is more of a drink kiosk, while the other is a quick service restaurant.  I headed to the quick service to try out a sampling.  I started off with the vegetable curry pods, because the other option for these, cheeseburger pods, sounded disgusting.  These are basically just steamed buns and they were just alright.  This restaurant also offers bowls which allow you to choose rice or veggies and top it with a meat of your choice, making this one of the healthier places to eat in all of Walt Disney World.

I followed this up with the Blueberry Cheesecake and the specialty drink of the Na’vi which can also be purchased in a Flute Cup that can be taken home.  The drink was very lemonadey, but still very delicious and refreshing.  The cheesecake though, was fantastic and stands out as one of my favorite desserts at the park.  I can’t wait to taste it again!

While I don’t have any photos of this, I just wanted to shout out to the cast who all really sold the idea that we were on a distant planet.  As I waited in line for my food, the cast member asked what I had done today.  I told her everything.  Her response?  “Oh how lucky for you.  I’m always so exhausted after the interstellar travel that I don’t get to do too many things the first day I get here.”  The cashier also remarked that the Viper Wolf I was buying was so cute and was the only one she would want to be chased by if one were to chase her.  They also all new several words of the Na’vi language, adding that much more immersion to the world.

If it isn’t clear by now, I loved Pandora.  More than I thought I would, actually.  Everything is so eye catching and the details are everything we’ve come to expect from Disney.  From cast members that are fully immersed to beautiful scenery to a fantastic background soundtrack, this part of the park gets everything right.  Even if you aren’t a fan of Avatar I truly believe this zone does enough to engage you with the brand and also makes it enjoyable to all.  What I mean to say is, don’t worry if you haven’t seen the film.  Pandora is small but packs a wild punch and easily takes its place among the best looking and sounding areas in any park in Florida.  It takes technology to the next level while still giving us many of the things we love about Disney.  Pandora opens to the public on May 27th.  It might be a planet far from Earth but it’s one that fully deserves your visit.