Hello all!  I hope you had a wonderful day of embarking into the second step of this event!  I apologize for the late post, but in my defense Li Shang took some time to acquire and ALSO we spent the entire day at Magic Kingdom, which meant less time with the game (and the blog) than normal.  That being said, let’s jump right into welcoming the love of my life…I mean…Li Shang! Considering the length of this event and the small amount of content, it’s really not a huge surprise that Li Shang requires a bit of work to welcome.

These are actually quite easy to grab when you realize that several characters, including Daisy and Kristoff, have short quests which drop them almost every single time. These are a bit trickier.  You’re fastest characters will be Mickey and Prince Charming with 2 hour quests.  While everyone may have difference experiences, I found that Mickey dropped the helmet almost every single time, while Prince Charming was a fair bit less consistent. 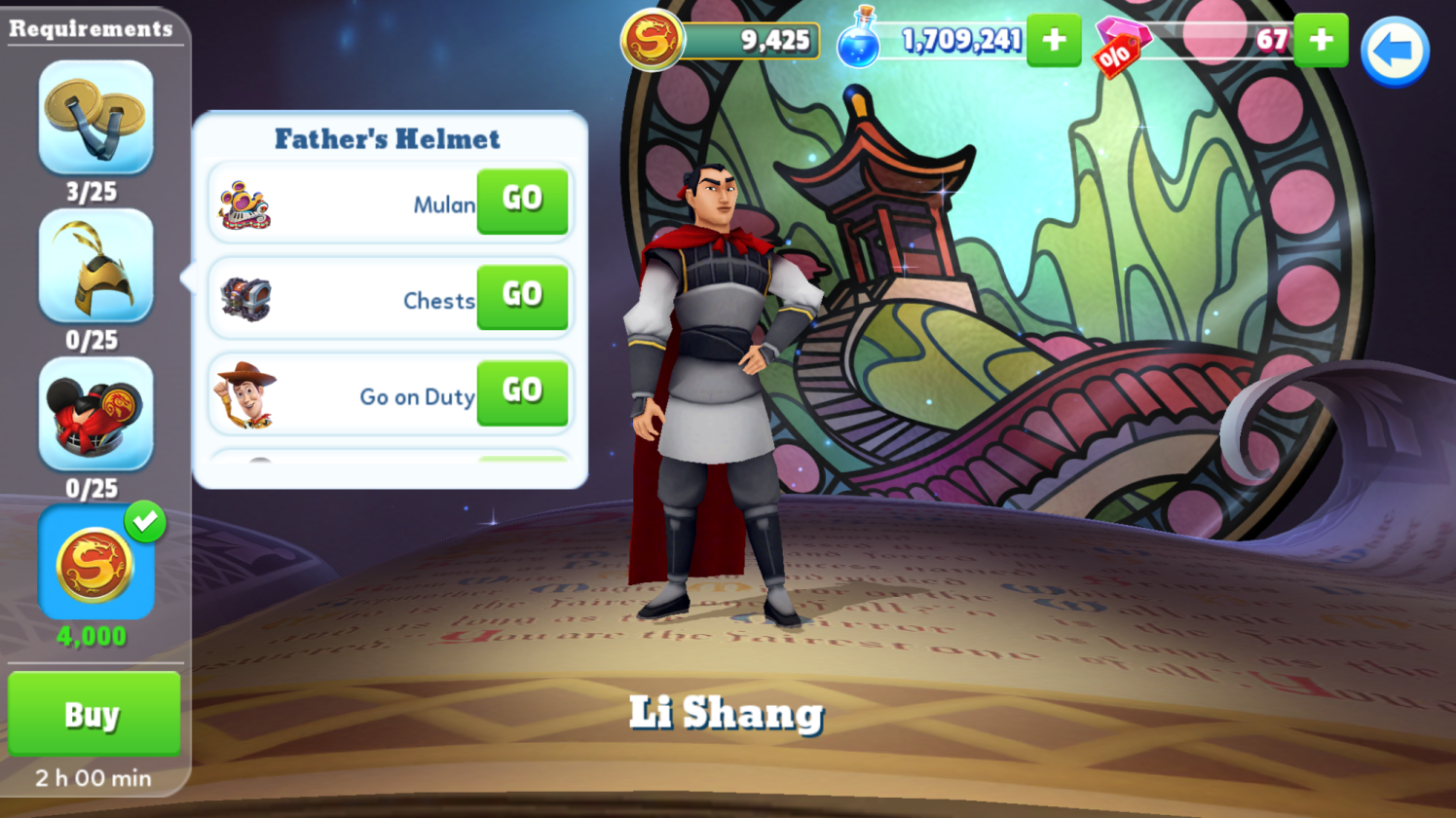 Hands down, you’ll want to make sure you have Mushu for this one as his 60 minute quest drops them and it is by far the shortest quest for them.  That being said, Mushu’s 60 minutes quest ALSO drops Discipline and Strength so you’ll want to get those out of the way ASAP with characters which drop them on shorter quests so that you can get the full use out of Mushu. After some heavy lifting, you’ll have your very own Li Shang running about your kingdom with my heart in his hands.  Oh, and he also carries that stick thing too I guess. Li Shang shows up ready to get down to business. And for him, business is proving that he’s as good as his troops.  Easy enough to say when there are no troops around to speak of.  Yeah we believe you Li.  Sure we do.

Oh?  You’re going to workout for us?  Hold on, let me just get a box of popcorn and my binoculars.  Wait a minute.  Okay.  Got them.  You may begin! While this quest is quite enticing, I actually urge you NOT to take it.  It’s a 6 hour quest but it’s completely non-essential to the timed event.  Therefore, you should hit the X button and click on Li Shang one more time so that you can get his next quest.

Oh?  The emperor knows all about us?  Well I am honored as well.  Does he know about the way we get constantly infested by robots and magic brooms?  Wait.  Did he send you to make sure that problem doesn’t spread?  Is this a SECRET MISSION?

This is the quest you want.  It’s only 2 hours and it progresses the event so make sure to do it first.  After all, we only have so many days here! Li Shang then shares his wisdom on battles.  That’s super helpful Li considering, you know, you guys don’t have a villain like other events.  No, when we were fighting villains, literally all we had was a snowman and a reindeer!

Li, I’m concerned for you.  Do you see troops that we can’t see?  Are they all in your head?  Should we be worried?

Oh dear.  Now you want barracks for the imaginary troops?  You know, you’re pretty but you really are getting high maintenance on me here.  Next you’ll want me to feed said pretend troops.  I’m gonna level with you.  They can eat The Incredibles.  They aren’t doing much for me anyway.

Li, for the last time, THERE ARE NO TROOPS OUTSIDE! First of all, that smell is Kristoff, and second of all, mentioning it is super rude of you.

After insulting the smell of the kingdom, going on about troops that are no where to be found and working out for our viewing pleasure, Li finally decides its time to build the barracks.  It’ll cost you 8,000 Event Currency and will take 4 hours to build.  It’s not super huge so you should just be able to fit it. From there, it’s time to set off 100 more fireworks, once again hitting 10 every hour.  Mickey looks bored of fireworks already.

And if all this isn’t enough, there’s also a coin collecting event and a new promo as well. I leave you today with a little magic from the Magic Kingdom itself, where I am always reminded of how great it is to be alive.  This game is amazing, but make sure to go outside and do something that makes you incredibly happy.  It will make everything that much more awesome.  And in the meantime, let me know how you’re enjoying the event so far!