So far in the “Now It’s Your Turn” project, we’ve talked a lot about games which involve a bit of brain power.  From strategic prowess to working together, these games are generally fairly mentally focused.  But what about the folks who want to show off their hand eye coordination?  What about the peeps who do better in a contact sport than in a math test?  Well, today we have something that is known as a Dexterity Game.  This means that a portion of the game actually involves movement and precision.  This is a game which will not only test your brain but also you aiming skills, or lack there of.  Hunker down to the ol’ saloon and grab yerself some whiskey because today is all about the old west and how it was won by flicking.  That’s right.  Flicking.

The old West.  A time of loyal lawmen and rough and tough outlaws.  The Cooper Clan has been looking to stir up some trouble and only the Sheriff and his Lawmen can stop them.  With their colts loaded, they head into the dusty streets.  Each side takes cover behind some barrels and cactus and the shooting starts.  Darting in and out of buildings, moving ever forward, only one side can win.  Who will have the sharpest shot in the West?  And who will see their name on a gravestone?  It’s high noon and a fight just got picked.

How is it Played?

The first thing to know about this board game is that there is no board to speak of.  Instead, following one of the scenarios outlined in the book, you set up the town accordingly, buildings, haystacks and all, and then players split into two teams.  The nice things about the teams is that you can have anywhere from 2 up to 10 players join in and it’s more than okay if the teams are uneven.  This means that this can be a sly dueling game or a massive party game.  With the table set up, the lawmen and Cooper clan in place, it’s time to start playing. 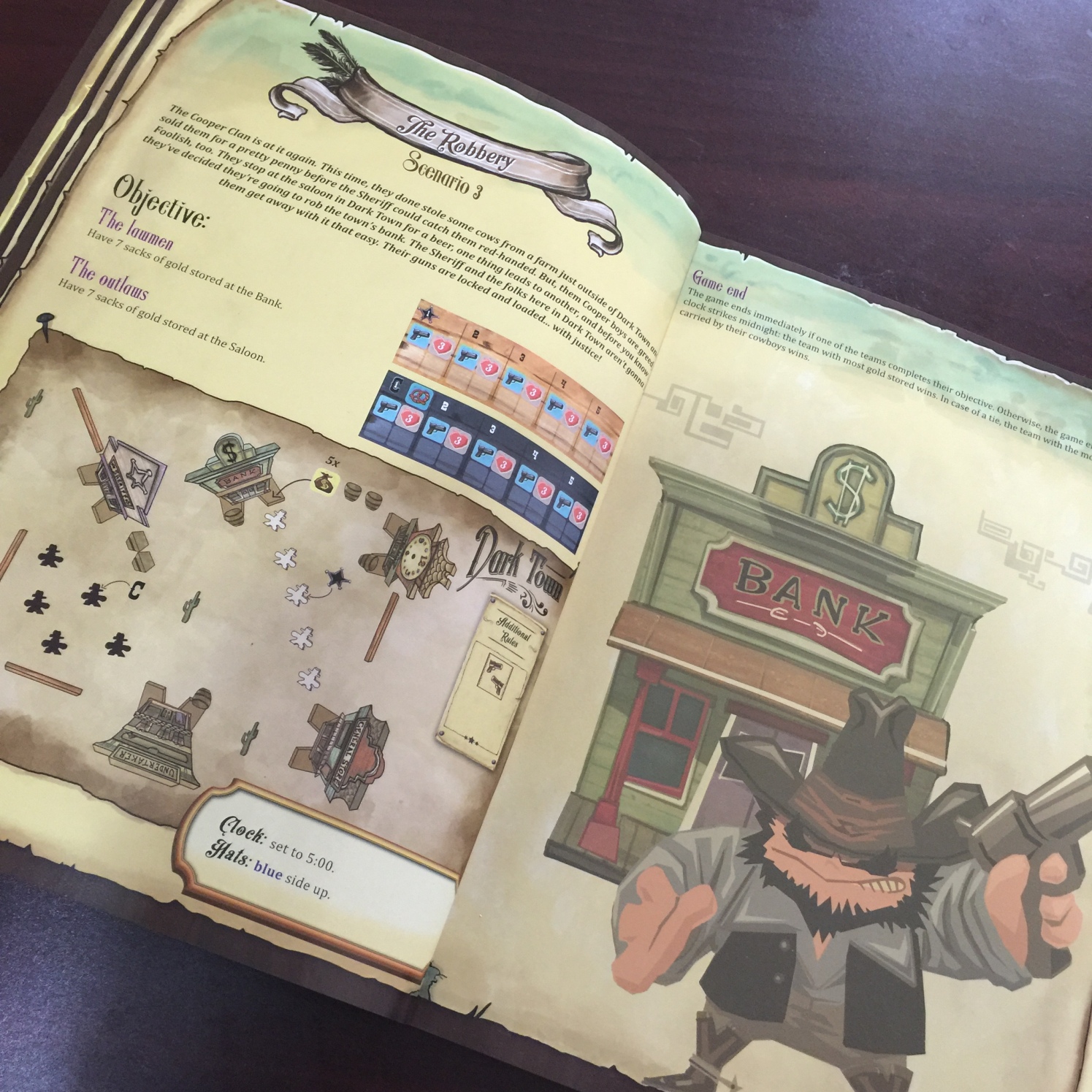 The book makes set up super easy and intuitive. Just follow the picture!

At its core, Flick ‘Em Up is all about, well, flicking.  But there are rules to flicking.  One can only ever use their forefinger and cannot flick off their thumb.  The idea here is not to go throwing pieces willy nilly all over the room, (though it will happen from time to time) but to have more of a controlled, steady hand.  When it is your turn, you can move any of the men on your team.  You get two actions.  You can move twice, shoot twice or move and shoot, and all of this involves flicking.

To move, you’ll replace your character with a little disk and then flick it.  Wherever it ends is where your new position is.  Be warned though.  Run into ANYTHING, and the movement fails and you lose that action.  So it is in your best interest to, well, try.  You can also enter buildings by flicking the disk under their entryway.  In this way, you can then shoot from the building or even collect items from that building.  Maybe you need a nice new gun or perhaps you’re looking to steal some cash from the bank.

Maybe you just need some cover!

The real fun comes when you are shooting.  You take one of the bullets, place it next to your cowpoke and then flick it at another cowpoke, attempting to knock them down.  If they get knocked down, then they lose a health.  If they lose ALL their health, that figure is removed from the game.  Many of the scenarios will involve trying to take down more of the other team than your own before the clock strikes noon.

But let’s say that you, a Cooper clan baddy, ran into the bank to steal some gold.  Perhaps one of the lawmen chases you inside, to stop you.  Now, you two will have a shootout.  You put your figures on opposite sides of the table and each takes a turn shooting.  If both miss, you move a little closer and then go again.  Miss?  Move a little closer.  The first person to hit the other person wins the shootout and gets to flick the losing player out of the building. 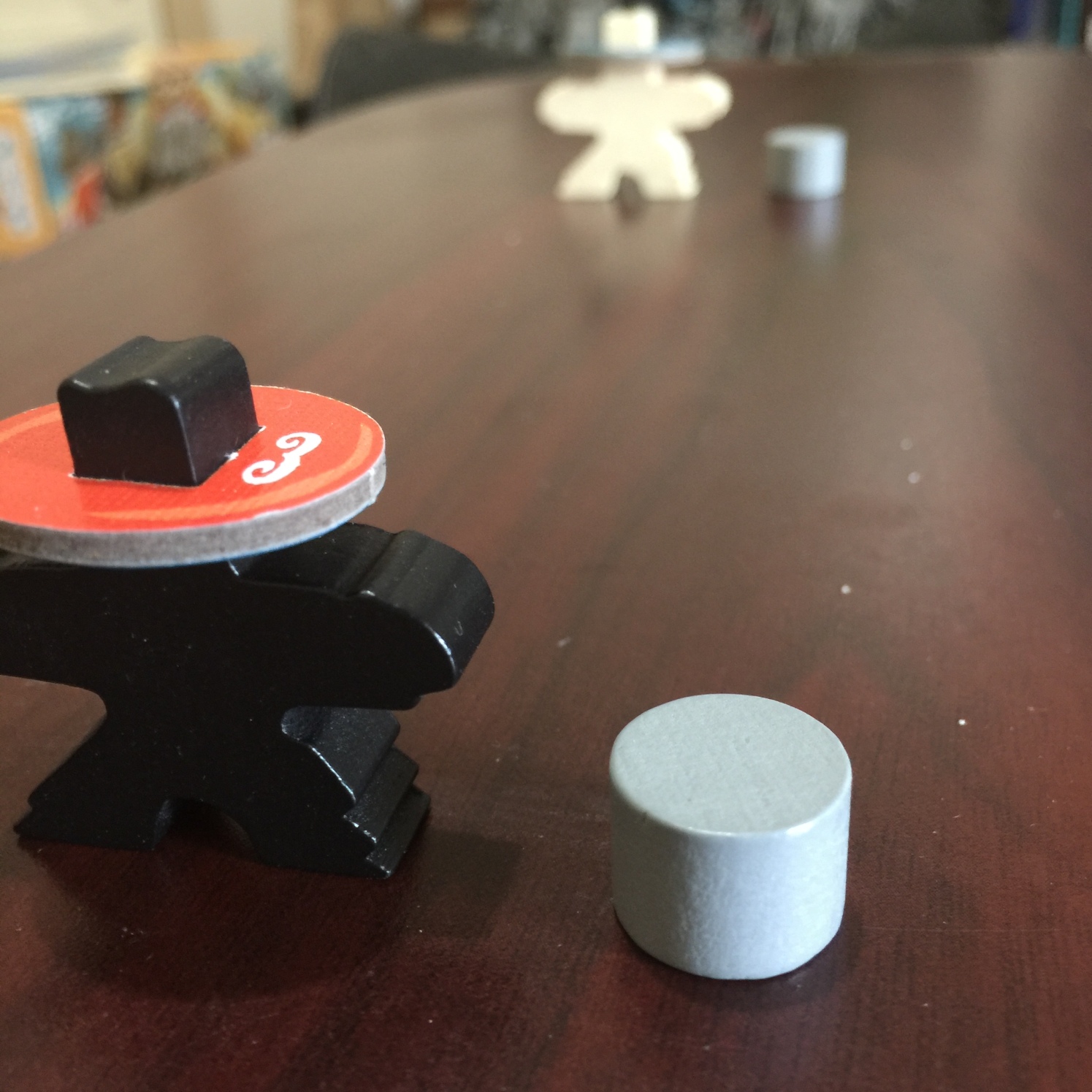 Reach for the sky!

When your turn is over, you’ll flip the hat of the figure you used in order to indicate that their turn is over for this round and then play will continue to the other team.

Early scenarios involve killing off the other team, but later scenarios start to introduce robbing the bank, or saving someone who is about to be hanged.  The great thing about the scenarios is that you learn as you play so you can start from the beginning with a group of friends, barely having read any rules and learn as the scenarios progress.  It’s a great way to get people into the game and playing fast.

As you kill off lawmen or clan folk, you add their hearts and even figures to that side’s box.  In a way, this means that the game self cleans.  Done with a scenario?  Just flip over your box and you’re ready to reset for the next one.  Everything about moving through the story and the game feels very streamlined.  Little downtime means more playtime and that’s always a good thing. 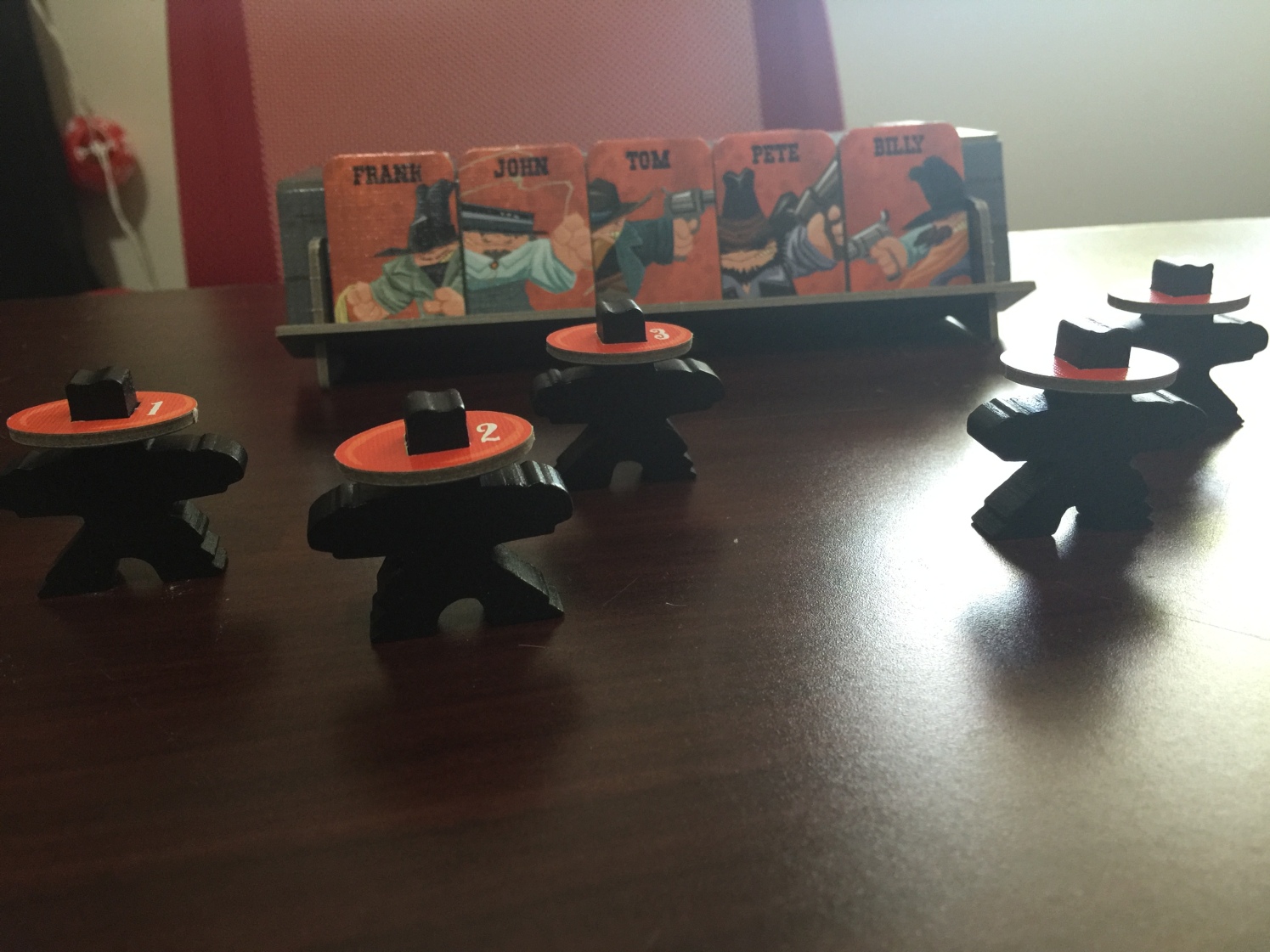 The baddies prepare for the fight.

There are even expansions that add cowgirls, horses and canyons which can make it so that you actually are playing across two separate tables, making the game even more crazy and hectic. 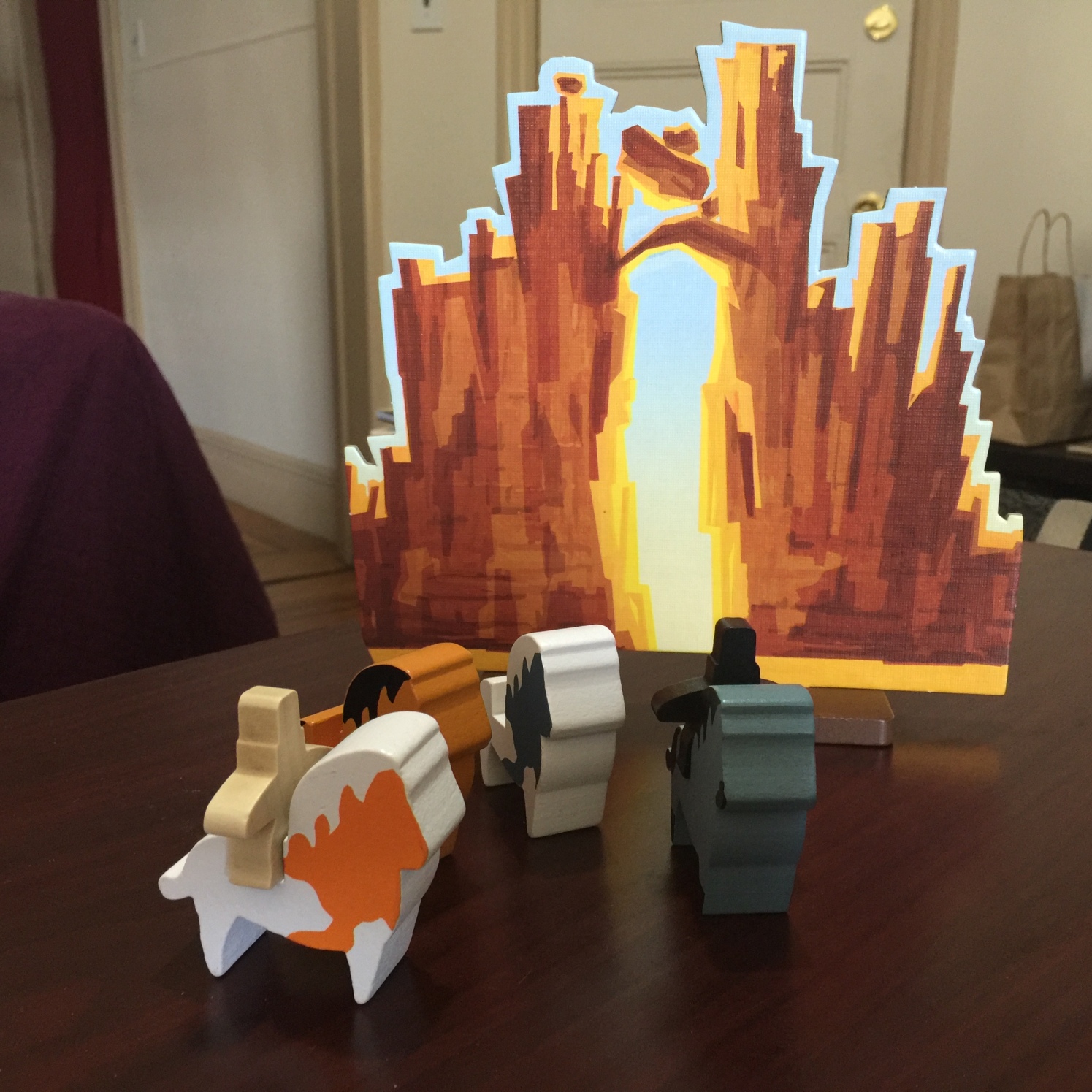 What is so great about Flick ‘Em Up?

I cannot stress enough how wonderful it is to have a game that is so flexible as far as player count.  Not only that, but its simplicity makes it a really great game to have a large range of players join in on.  From the newest of game players to seasoned veterans, there is something here for everyone. 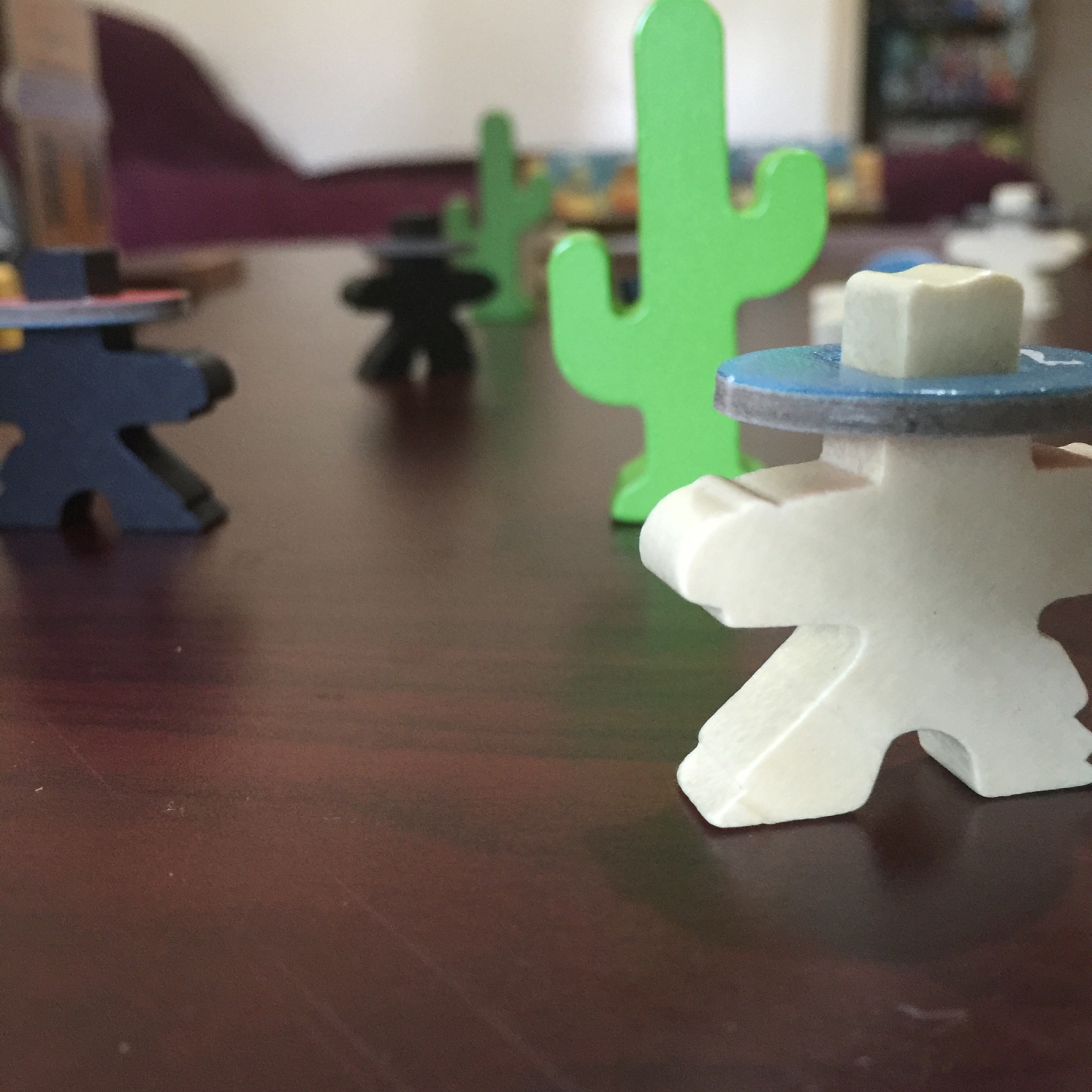 You’ll eventually start learning to hide behind things to get shot less.

The other great thing here is the theme.  This game is just oozing with cowboy goodness.  It’s the kind of game that will make you want to play the Tombstone soundtrack in the background.  I often find that players get into the spirit and start doing their best cowboy impressions.  As you progress, you’ll get rifles as well as different scenarios that take this theme to new heights and it is always fun to see what new element will be added next.

What Could Make Flick ‘Em Up Even Better?

This is a small complaint, and one that can even be fixed right at home, but I would love a piece that borders the table so that bullets go flying off less often.  Other dexterity games have introduced things like this and I would love to see it here as the only down time in the game comes from the inevitable, albeit rare, search from the bullet that just went careening off the table as a result of a faulty flick. 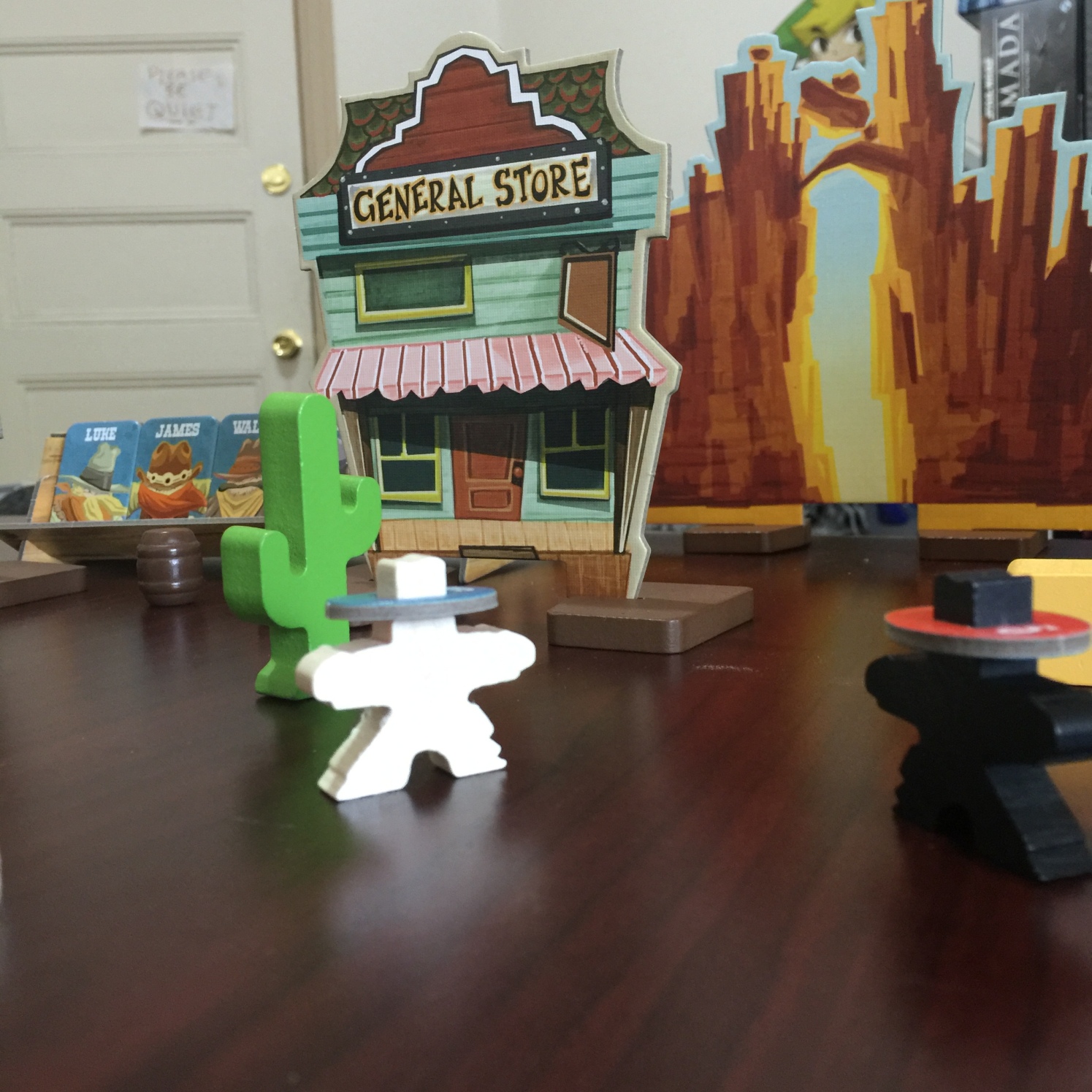 Flick ‘Em Up is a great game for the whole family.  It’s fast and fun and easy to play.  Something I didn’t mention before but that bares mentioning here is that I love the box for this game.  It’s full wood and has compartments and easy areas to store everything.  It breaks down and sets up easy, which is always a great thing.  More than many games on the market, this looks and feels like a really fun toy.  It’s always hilarious watching your friends try to find the best strategy for flicking and someone always comes out as a master flicker.  Spoiler, it’s never the person you expect.

If you’re looking for a fun filled cowboy game that’s adorable and easy to play for a wide variety of players, look no further.  I’ve walked into the middle of the dusty street, gun at my waste, hand on the trigger.  I’ve fought the Cooper Clan, saved the damsel and rode a horse into the sunset.  I’ve flicked with the est of them.  Now it’s your turn.