Something I love about board games is the diversity factor. If you have an interest, there is probably a game about it. From farming to harbor capitalism to space combat, it’s all here. But beyond that, I love that games come from all over the world in all sorts of shapes and sizes. In general, we will be talking about two types of games in this series: Euro Games, which obviously come from Europe, and Ameritrash, which of course come from America. But today bends the rules a bit. Today we’ll be talking about a Japanese game. THE PLOT THICKENS! And to mix it up even more, we’ll be talking about a game which falls under the category of “Hidden Identity.” Are you a Shadow, lurking in the darkness? Or perhaps a Hunter, looking to lure out the Shadows and rid of the world of them? Or perhaps you are a mere Civilian, just trying to water your garden as these two threats wage war around you. Either way, you’ll have to keep your identity a secret if you plan to survive and win Shadow Hunters. 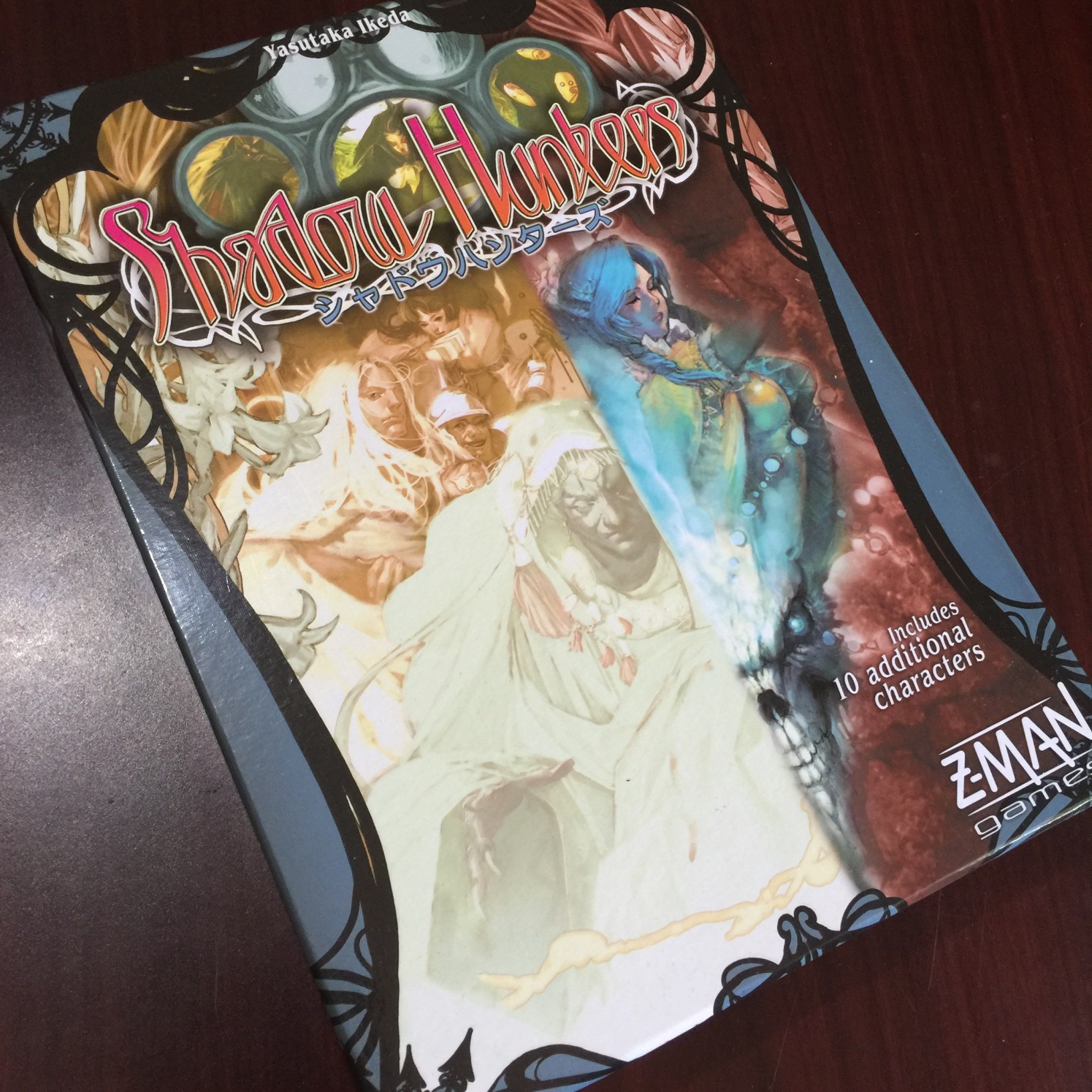 In Shadow Hunters, you take on the roll of a character from one of three groups: Shadows, Hunters or Neutral (Civilians). The Hunters want to kill off the Shadows, dark creatures from the underworld, and the Shadows want to kill off the Hunters, because, well, they started it? The Civilians are thus, caught in the crossfire. The trick is that everyone starts out knowing only their own identity. Only through tricks and manipulation can you find out who is who in order to understand who is your ally and who is your enemy. And how do you win? Well, everyone’s character card has a “Win Condition” which means that everyone has a different goal. Who will survive this epic fight to the death?

Everyone starts off Shadow Hunters by being given a card which they are told to keep secret. On the card they will find a few pieces of information. Their character’s name, the letter corresponding to where they fall on the damage track, their health points, their secret power and their win condition.

Keep it secret. Keep it safe.

They also get two blocks of their color. One of these goes down on the damage track of the board, the other is used to show which location your character is currently at. For most characters, this game works differently than most. Typically, when there is a track with numbers on a board, you want to go up it, but since the track represents damage, you want to try to NOT go up it. 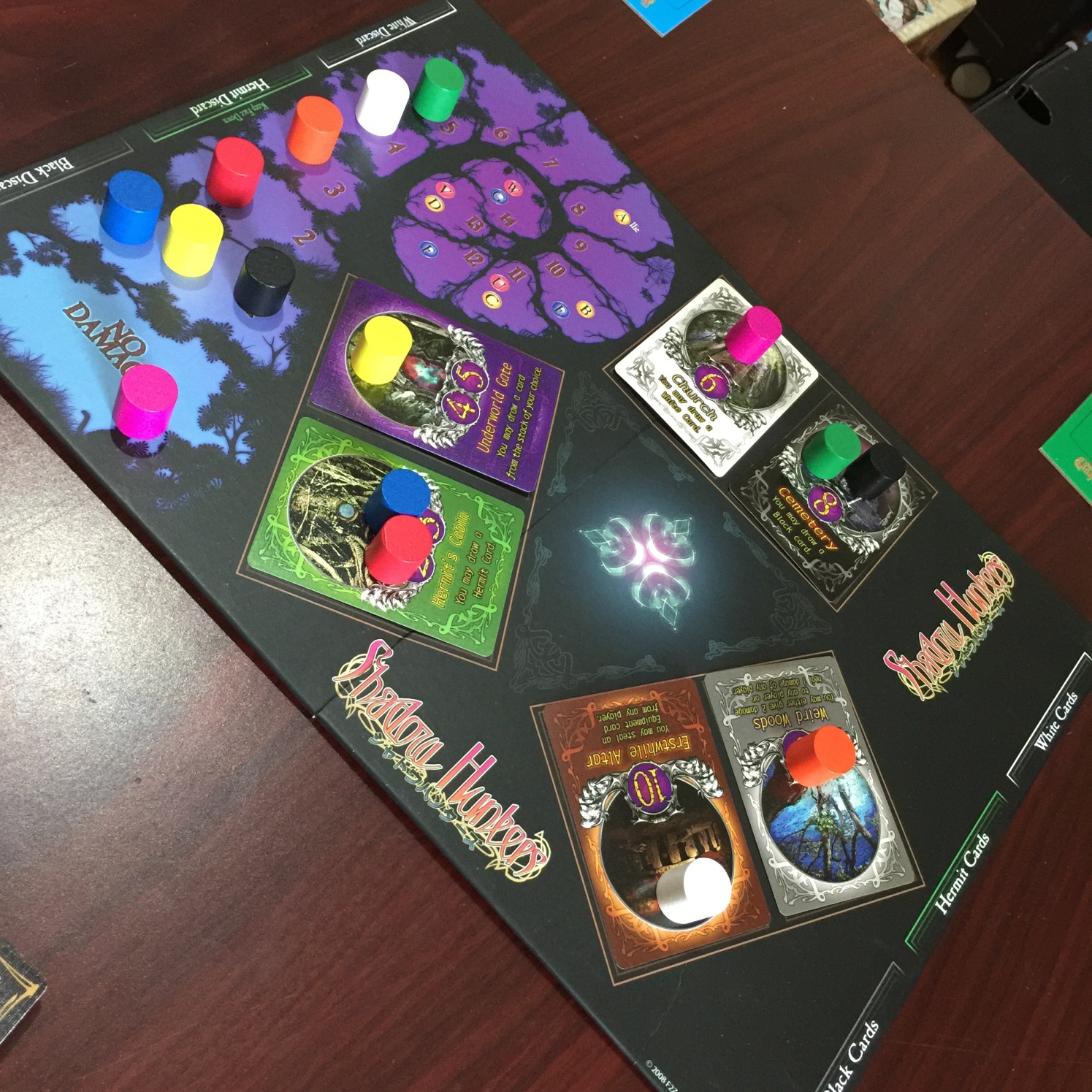 The further up the track your color is, the closer to death you become.

The second half of the board is made up of six locations: The Hermit’s Cabin, The Underworld Gate, The Weird Woods, The Cemetery, The Church and the Erstwhile Altar. At the start of your turn, you’ll roll two die to determine which of these you’ll be visiting. All of them come with a different perk, but it also matters because anyone on your location or the one right next to it is a prime target for attack and as soon as you start figuring out who everyone is, you’ll be ready to do some fighting.

The best way to find out who someone is is to roll a 2 or 3 and visit the Hermit’s Cabin. Here, you may draw a Hermit card which you then give to a fellow player. The card might say that if they are a hunter, they must lose a health. Only the person who drew the card and the person who got the card know what is on it. As you hand said card to a player and watch them sweat as they move their health marker up, you suddenly know their identity. In this way, Shadow Hunters is also a game of deduction. 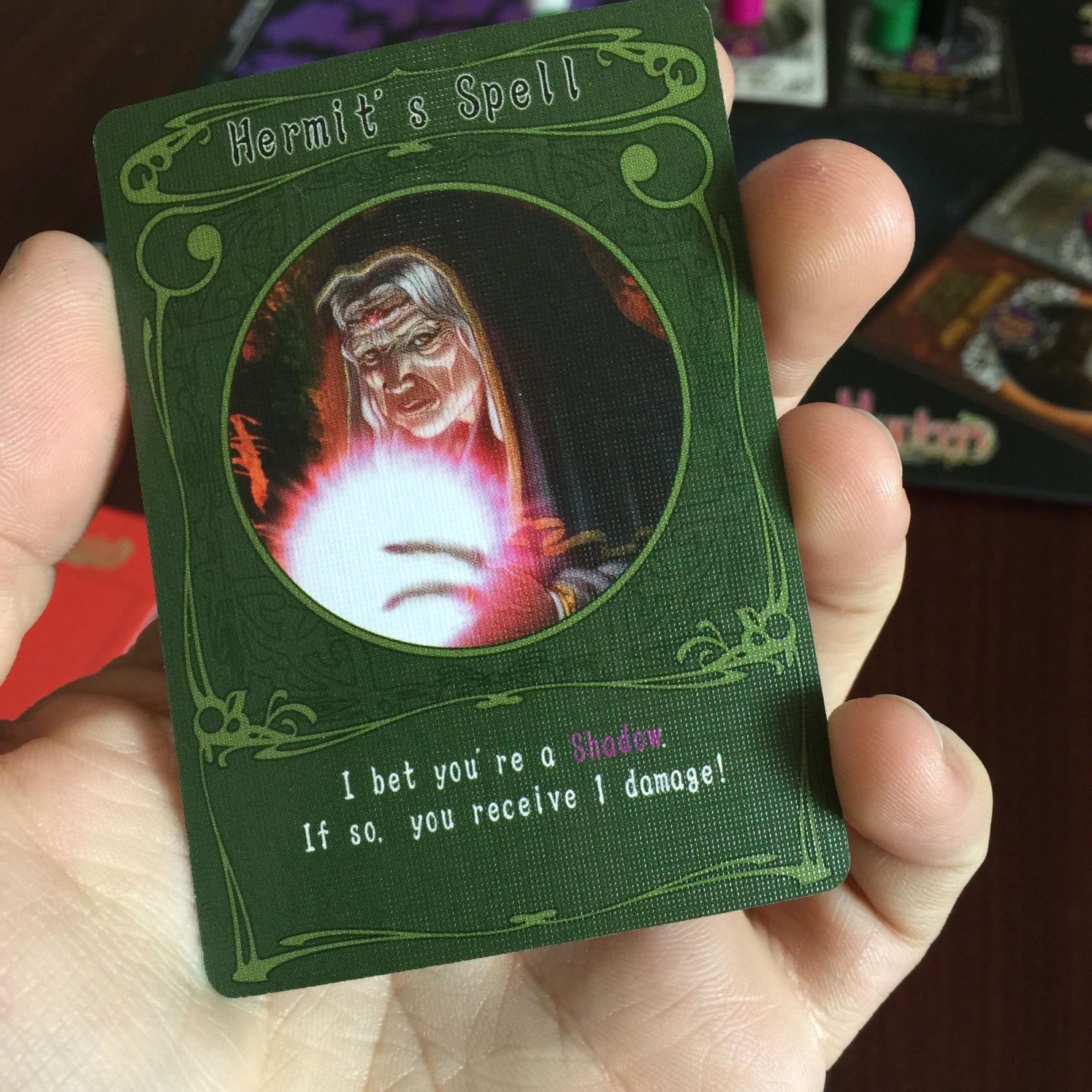 Other cards on the table allow you to draw from the black and white decks which give you useful, or sometimes hurtful weapons, one time abilities and powers. You might draw a katana or a shotgun but be careful, you might also get attacked by spiders. There’s a bit of luck and chance involved.

You’ll want these items though because once you know who is your enemy, you’ll need weapons to make your attack. To attack normally, you roll a 6-sided die and a 4-sided die and then take the difference as the amount of damage. Different weapons augment this for better or worse. 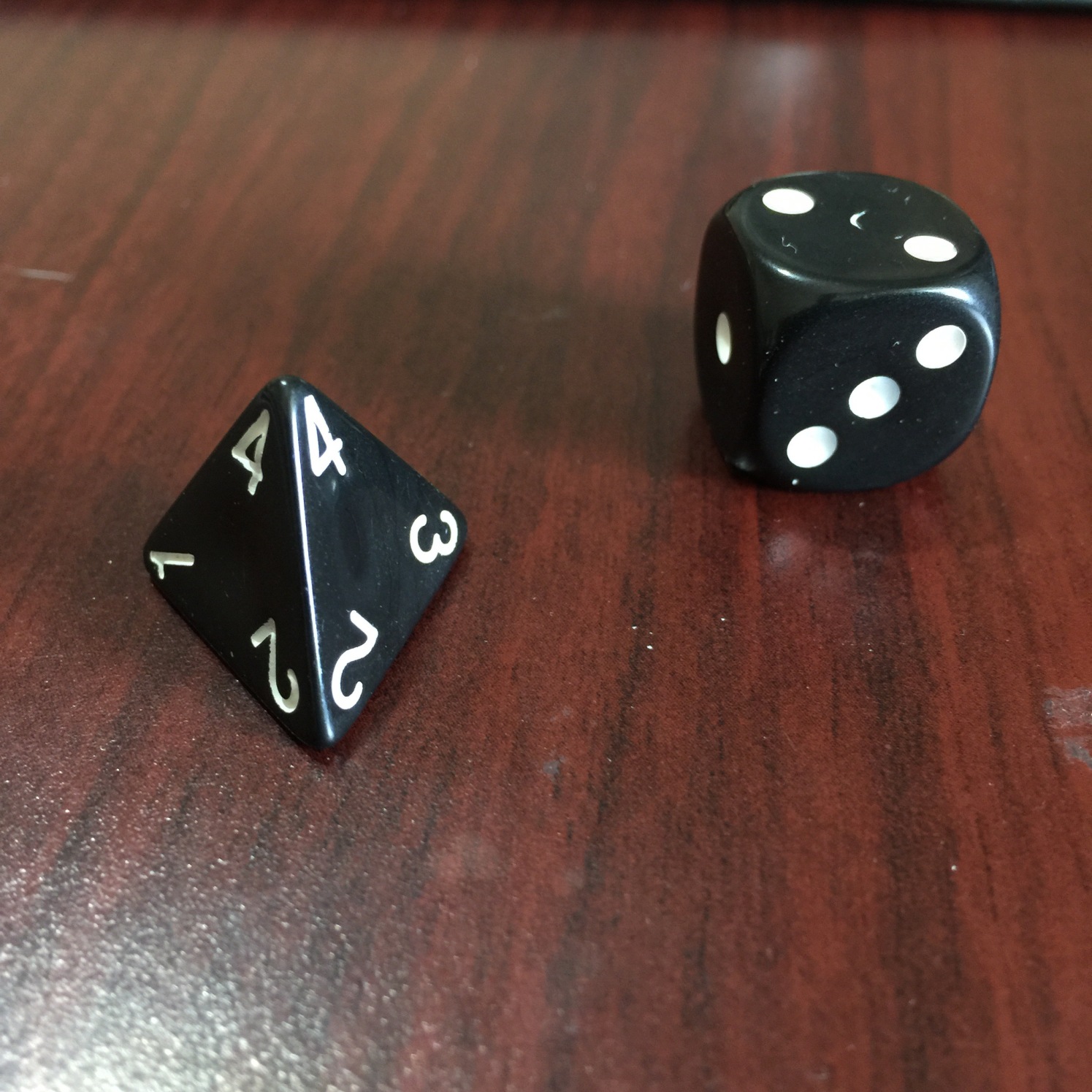 For many of you, this will be your first four-sided die.  The number at the point is the number rolled.

The final piece of this Gothic puzzle is the power on your card, as well as your win condition. Your power will almost always tell you that you must reveal to use it, so it becomes very risky to do so. Yet, some powers allow you to fully heal and other amazing goodies so at a point, it’s almost necessary to reveal. One of my favorite powers allowed me to not reveal but to lie on Hermit cards. 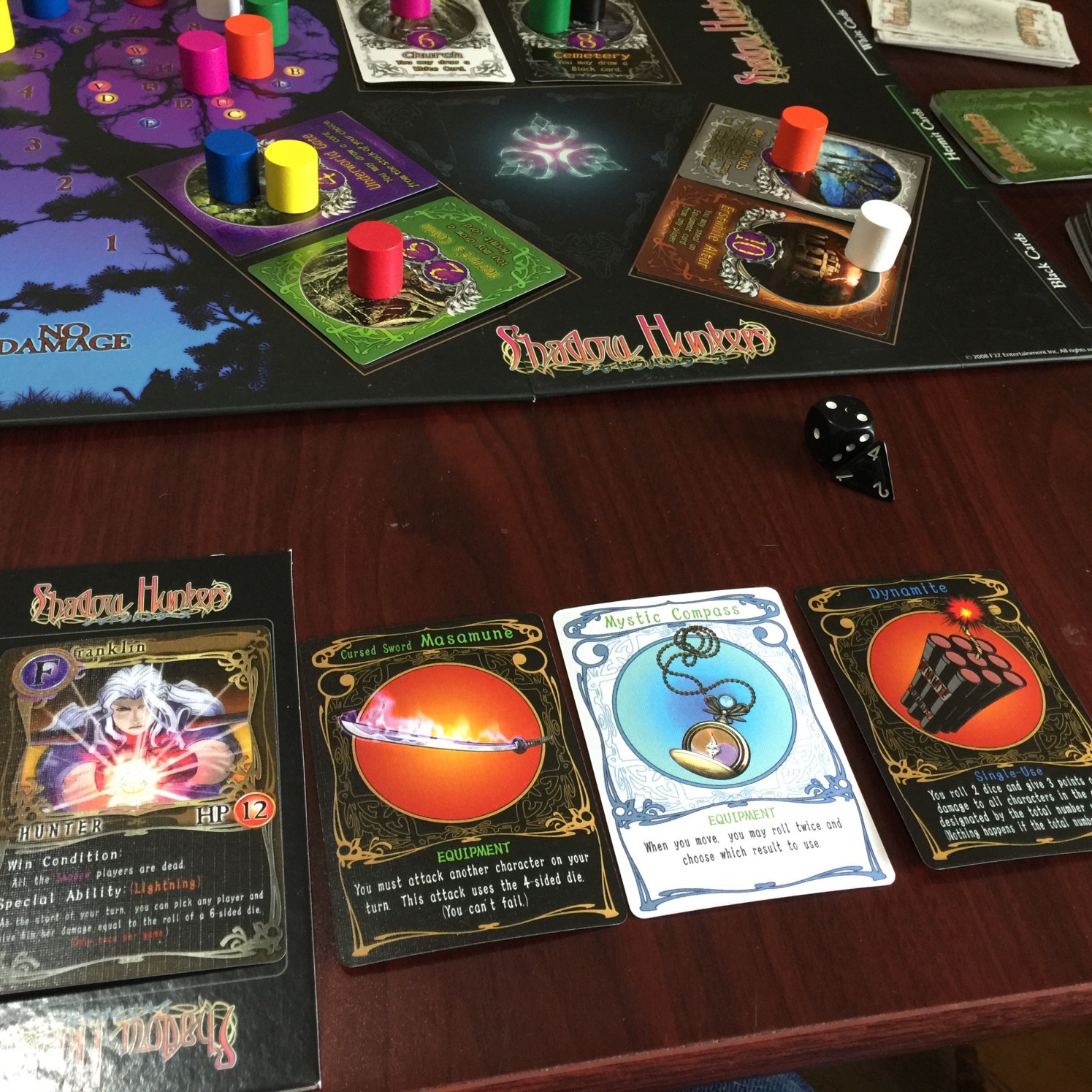 Hopefully by the time you reveal your true self, you’ve got a bevy of weapons and trinkets at your disposal.

The win conditions are also crazy. For most Hunters and Shadows, the win comes by killing off the opposition, yet the civilians provide a trump card. They range all over the place with my favorite being a civilian who wins if they are the first to die. This means that while waging war without quite knowing who is who, you might accidentally make someone the winner. It’s a bit random yet with some skill, a bit of deception and crafty wits, you can definitely turn the tide in your favor.  The first to complete their win condition is the winner, but since there are sort of “teams” this also means that multiple people could win at the same time.

What is so great about Shadow Hunters?

After everything I just said and all the tricks and the deceptions and the win conditions, this game might sound a bit tricky, but my favorite thing about this game is that it is super simple. It’s easy to learn and to teach. This means that it is perfect for a first timer or someone who plays games all the time. Yet, the fact that it is also very adult in its themes is great to. Many simple games are made for families or kids, which is fine, but it’s nice to see a more grown up game that is still quick to get into. 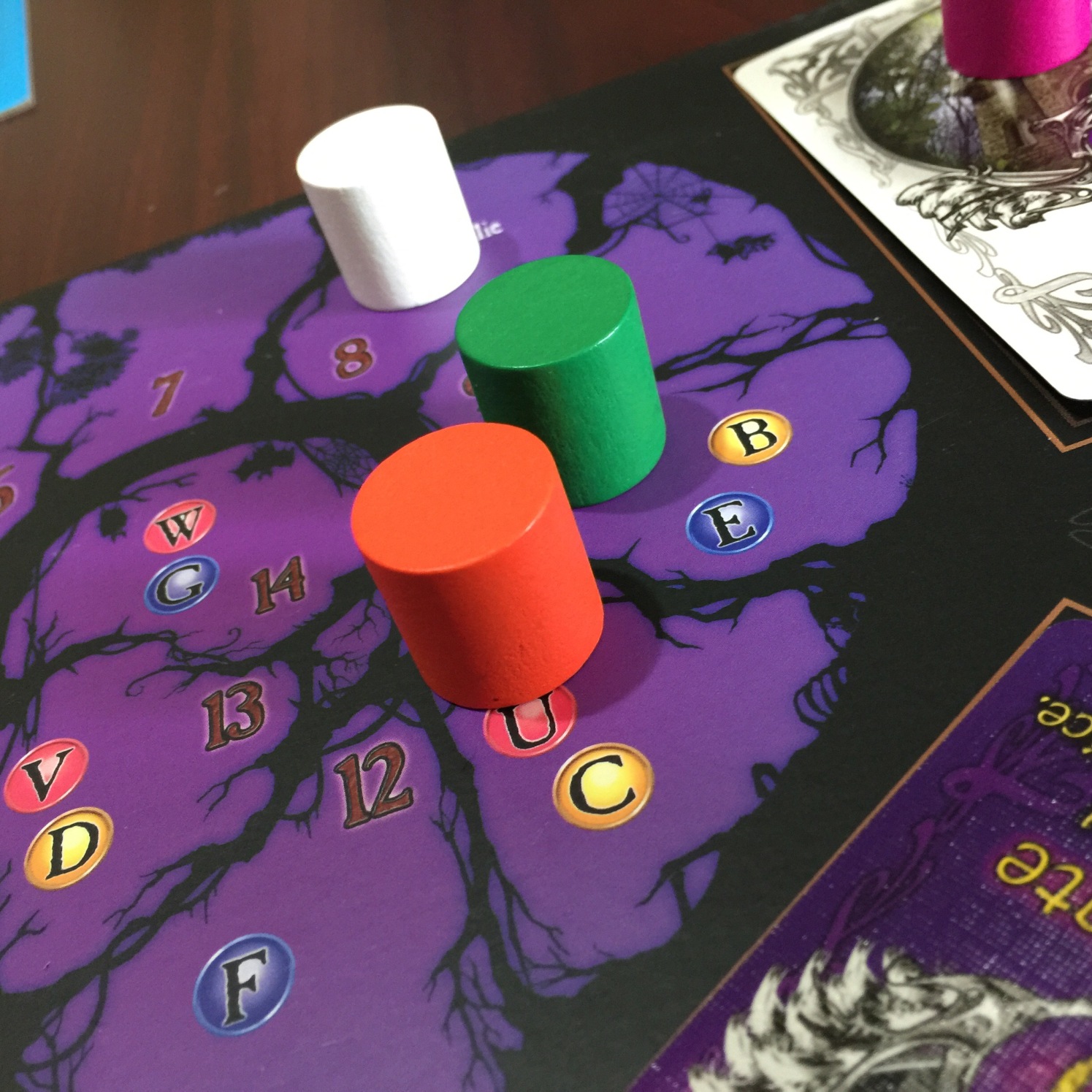 Those letters look so nice and colorful. Too bad they represent death. Your death.

Beyond that, Shadow Hunters is tons of fun. Between all the backstabbing and trying to figure out who is who, there’s this great mystery that is different every time you play thanks to differing win conditions, powers and cards that are drawn.

I am also super in love with the fact that this game allows for up to 8 players. This is quite rare in board games. Because of this, it is always one of the first games we pull out when we have a big party.

Big group? No problem here. Shadow Hunters is ready to let the whole family kill each other.

What could make Shadow Hunters even better?

I honestly don’t need Shadow Hunters to be better. What I would love is more games like it. There are quite a few hidden identity games. Coup, Avalon, Citadels. The list goes on. Yet, none of them manages to do it with quite the same sense of fun and mystery as Shadow Hunters. Most games like this come down to who is the best liar. Yet, because if the dice rolling and cards which allow you to whittle down your choice, you can also just be good at deductive reasoning or better yet, someone who is bad at both things might just get lucky and win by accident. I like that idea that you don’t have to be the best player to win. All you need to do is give it your best shot and have lots of fun in the process. 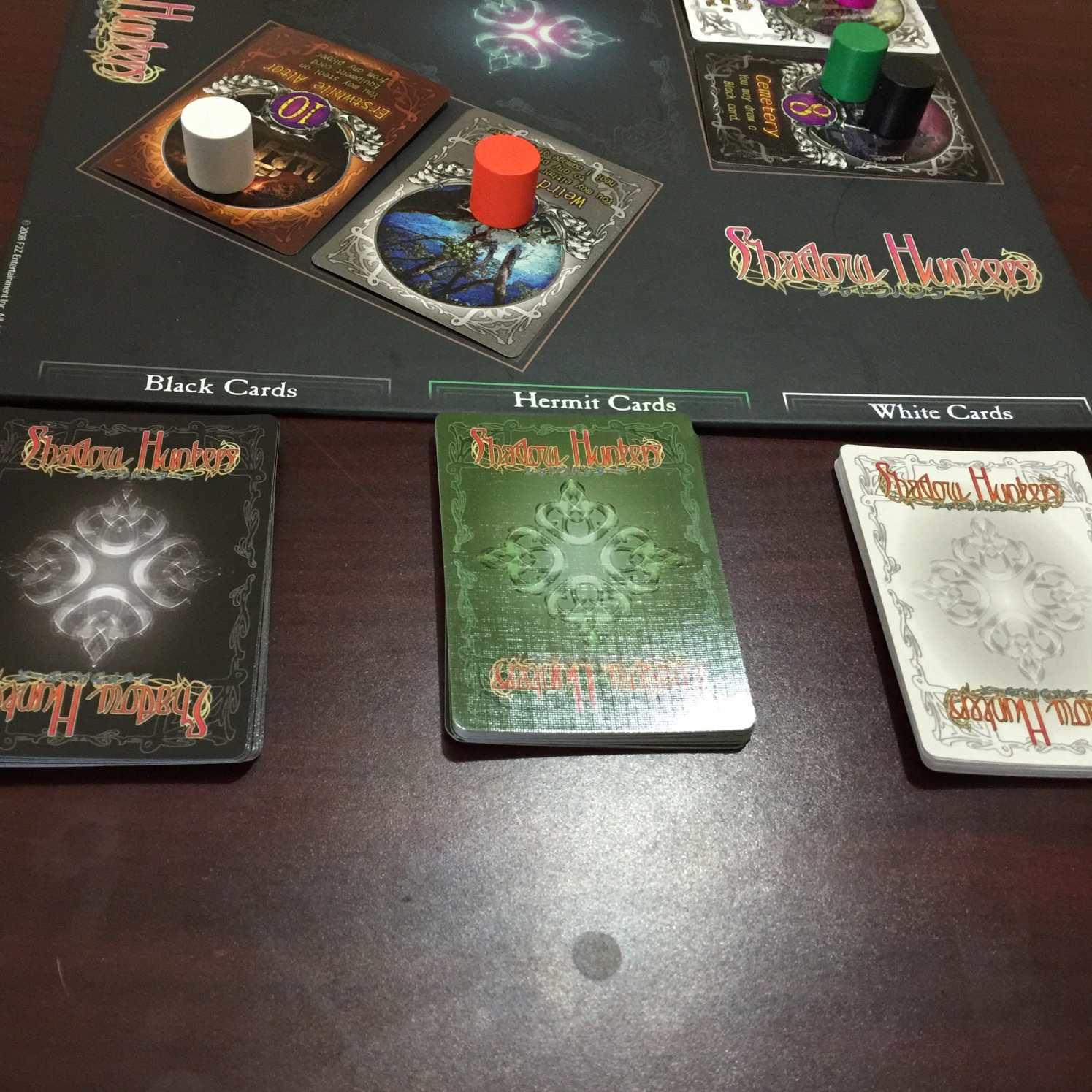 Roll a seven? Go where you want. Or as I like to say, pick your poison.

Shadow Hunters is a lesser known game but it is worth checking out. It has lots of good reasons to keep coming back, a wonderful style and some great artwork. Anyone who is a fan of anime or Gothic horror is going to love this game. From Vampires to Werewolves to civilians who just got in the way, this game is always crazy and fun. Whether you’re trying to hide in the shadows and lure out the hunters or you just want to get all the damage so you die first and win, every game of Shadow Hunters feels a little different and all of them are always loads of fun. I’ve bested the Shadows, lured out the Hunters and got caught in the crossfire as a Civilian. Now It’s Your Turn.