Welcome back to N.I.Y.T. and a happy birthday to you…if, of course, it is your birthday. If not, I hope it’s at least a pleasant day. Many board games on the market are considered cooperative. You work together to try and beat the game with your friends. It’s you versus the board and you either win together or fail together. These games are about cooperation, companionship and togetherness. Survive: Escape From Atlantis is NOT one of these games. Survive is ruthless. It’s the quickest way to get your kind-hearted friends or sweet 92 year old grandma to mercilessly backstab you by eating your characters with a sea dragon. It’s mean and cut throat and THAT is why you simply must try it!

Survive: Escape from Atlantis along with its cute little expansion baby.

It’s the turn of the 20th century. The smell of adventure is in the air and rumors have spread of a mysterious island where there are riches as far as the eye can see. Several groups of adventurers seek the island and to their astonishment, the rumors turn out to be true. Hooray! They reach Atlantis and loot her spoils. But Atlantis holds mysterious secrets and the island doesn’t quite appreciate being pillaged. As they go to leave with their loot, it begins to sink. Well at least we all brought boats and can row to shore, right? What’s that? There are evil monsters lurking in the ocean that are going to eat all of us? Oh dear. This is not going to end well. 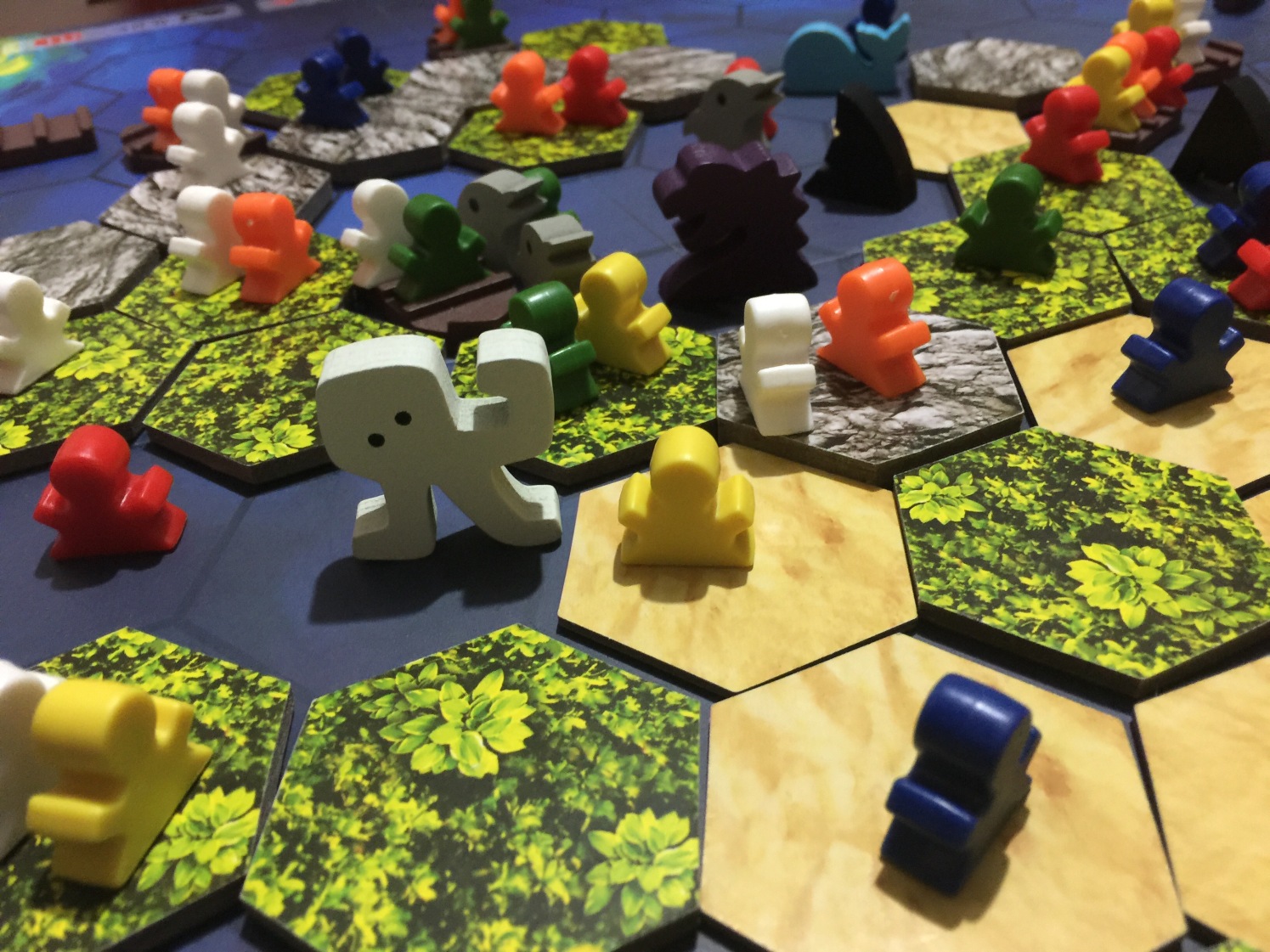 In Survive, each player starts out with a group of colored meeples (What we gamers called the little plastic people that we game with) and the board in front of them. The board is made of tiles which are randomly placed. There are sand tiles, forest tile and mountain tiles to represent the different elevations of Atlantis. Players go around and place one meeple at a time on an empty tile until all the tiles are filled. Then, they each get to place two boats, in hopes of planning their desperate escape.

The set up before helpless survivors are added. Don’t worry, those little purple fellows guarding the center and the land at the corners are only man eating, boat eating sea dragons. No biggie.

On the bottom of each meeple is a number which represents the amount of points they are worth if they should escape to dry land. Some meeples are worth 6, think of them as the scientists or doctors, while others are worth 1, or as I like to call them, the Kardashians. The trick is that once the meeples are on the board, you CANNOT look at their point values until the end of the game. Things get confusing fast, and no matter how hard you might try to remember who is who, it’s a bit of a losing battle.

Oh dear. That shark looks hungry. Now is that fellow he’s after Reginald, the esteemed artist, or Howard, the neighbor who doesn’t mow is lawn. I just can’t remember!

Once the setup is done, each player moves their meeples three spaces. This can be used on boats that they control OR all on one person OR divided amongs meeples. Then, starting with sand tiles, they remove a piece of the island, representing the land sinking. They look at the tile they just removed. On the back of the tile is a picture. Some represent an ability they can use later but most represent a creature which enters play instantly. So if you take a sand tile from under grandma’s meeple and reveal a shark, grandma has just been eaten. She’ll remember that. 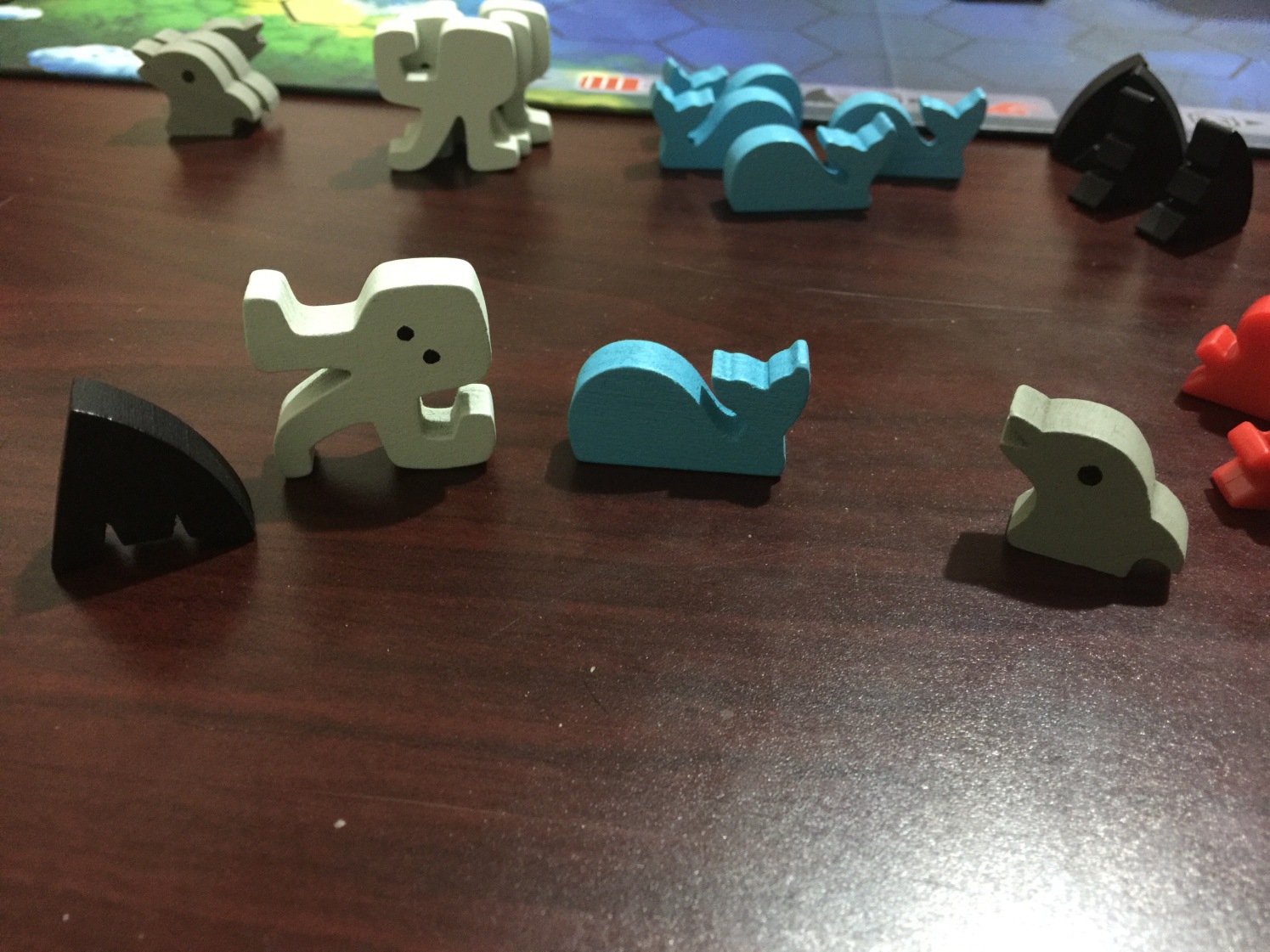 And joining us now is the cast of “Probably Going to Drag You into the Salt Water Abyss.” Let’s give these guys a big round of screams.

Finally, you roll a dice, indicating which creature you can control this turn and how many spaces they can go. This is when things get dark because no matter who is friends with who, if you roll a sea monster and there is a sea monster next to your husband or wife, they are going to get eaten faster than they can plead for Atlantean mercy.

Oh good, a dolphin. You can’t kill me with a dolphin right? RIGHT?!

The game progresses like this with less and less land being available and survivors trying desperately to get to land without being eaten by a sea dragon or shark, ripped from the land by a squid or capsized by a whale. The only nice animal is a dolphin, which protects you from harm, but at any point, someone else might roll a dolphin on the die and take away your one chance at a happy life back on the mainland.

The safety of land quickly dissipates and is replaced by the cold terror of adorable squids and shark fins.

This continues until you reach the mountain level of land, at which point one tile will reveal a vicious volcano which kills anyone who has not made it to land. At this point, the game ends. The players pick up those who survived and add up points and the person with the most wins. 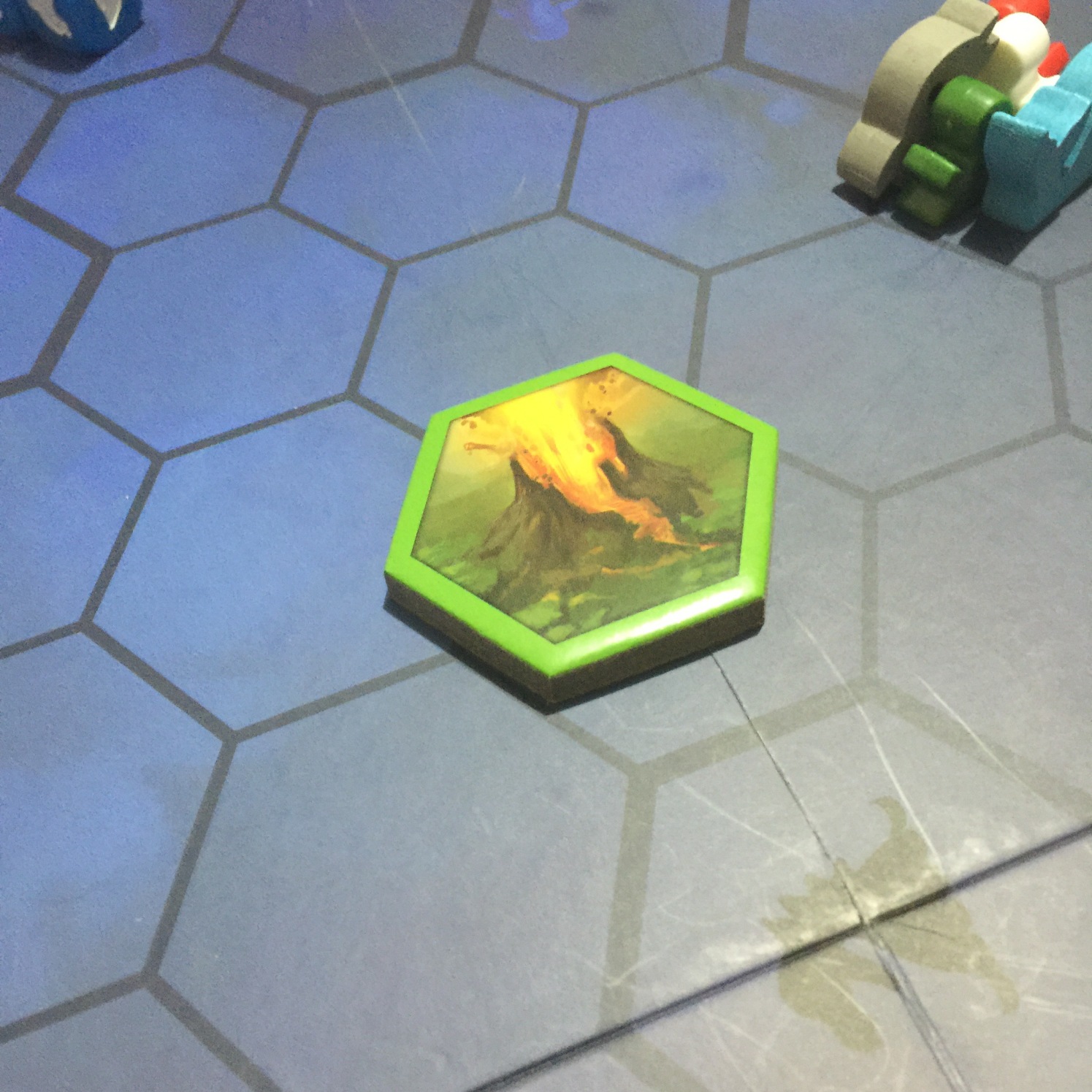 What is so great about Survive: Escape From Atlantis?

There is A LOT to love about this game. Keep in mind that it has been around for over 30 years and something to know about board games is that the longer a game has survived, (see what I did there?) the more amazing it probably. is. Survive is the kind of game that players get excited about just looking at it. They see their meeples and they see the dragons and sharks and squids on the side of the board. There’s this sense of terror and glee all at once. As you explain the game, you can see players’ eyes light up because they can already see that it’s going to be a bloodbath and no one is safe. The fact that the players actually help setup by placing meeples gives them even more stake in the game, making it perfect for newbies or people who think they just won’t have a chance against more seasoned players.

Hey there! Welcome to party island. Grab a drink and bask in the glory of being alive.

I also love that since it is a great game for beginners, it is a great way to break the ice of competition. New players are often scared to compete or scared to TRY to win. They feel self conscious about it for some reason. Giving them a game like this where a whole piece of the game is eating your opponents with sea monsters allows them to open up and begin to play a little dirty. One should never be a jerk face when playing games. But being sly and having fun are different than being a jerk face and often, getting the chance to eat someone that just ate you gives that new player a sense of accomplishment and the feeling that, yes, they could be good at this game.

Everybody get in the boat and we’ll pretend this is a cooperative game…until a whale shows up. Then I’m taking you all down with me.

What could make Survive better?

There’s already a great expansion for the game that makes it more interesting and you will see from our photos that we played with it. There are actually three expansions but they all come boxed together now. The expansion makes it possible to play with up to 6 players and adds the dolphins and squids which add to the chaos. I definitely recommend it. There is also a new version of the game which takes primarily the same rules but is set in space. Personally, I like the theme of Atlantis more BUT if you are someone who is only going to play a game if it is set in space, than I highly recommend giving that one a try!

I prefer saying “Nom Nom” to saying “Pew Pew” when I eat my foes.  But to each his own.

Survive: Escape from Atlantis hits our table at least once a month and almost every time someone new joins us for game night. It always results in hilarity and crazed laughter. Even to gamers who I play crazy complex games with, this is always one that gets a ‘yes’ when I ask if we should play it. It’s fun and colorful and even putting it on the table grabs the attention of every player and makes them excited to play. Despite all my talk of eating people, this really is a solid game for the whole family and, with the exception of the rules, there are no words so even youngsters can enjoy the fun! I’ve visited Atlantis, basked in its riches and made my daring escape, while dodging sharks and squids and begging for the help of dolphins when whales wrecked my boat. Now It’s Your Turn.