The Jungle Book and Why I Loved It

By now you’ve done one of two things. You’ve either seen the reviews for The Jungle Book and know it’s amazing. Or, you actually went and saw The Jungle Book and know it’s amazing. I wouldn’t think of this post as a review, but rather my impressions of the film. After all, I’ve only been going on about how much I wanted to see it since the first trailer. The fact of the matter is, The Jungle Book is everything I wanted it to be and more. It was funny, moving and often terrifying. Make no mistake, there will be plenty of spoilers in this article.

Baloo’s mad at me because I told him the ending of Star Wars.

Right off the bat, Disney fanatics will notice the inclusion of music from the original film leading the way into this adventure. Music plays a huge roll in this film. Much bigger than I had initially thought actually. And that brings me to our first big spoiler. There is in fact singing in the film. Two songs actually get sung during the course of the film, ‘Bare Necessities’ and ‘I Wanna Be Like You.’ This is a great surprise, not only because of the singing itself but because of the fact that the songs are functional within the film. Sure, King Louie’s intro to the song is a little jarring, but you don’t really have time to process that because you’re just so excited that Christopher Walkin is singing this song. During the credits, we also get a version of Scarlet Johansson singing Kaa’s ‘Trust in Me,’ which I’m glad to see was not included in the film, as it would have destroyed one of my favorite sequences in the film. Even the score it magnificent and constantly keeps the action moving at a brisk pace.

And now ladies and gentlemen, hot off his tour in Celebration, Florida, it’s KING LOUIE!!!

I want to talk about the animals and their animation in a moment, but first, we have to talk about the single element that makes this film work. Neel Sethi is brilliant as Mowgli. It is a huge risk to make audiences watch a child actor for two hours. Kids can range from bad at line delivery to boring to annoying, but Noel is none of these things. He breathes and talks and moves like Mowgli. He is so fun to watch and given that none of these animals are actually there with him, he makes us truly believe everything around him exists. Of all the big names in this film, the one that sells every minute of CGI and talking animals and crazy big orangutans is Neel and he makes it look easy. 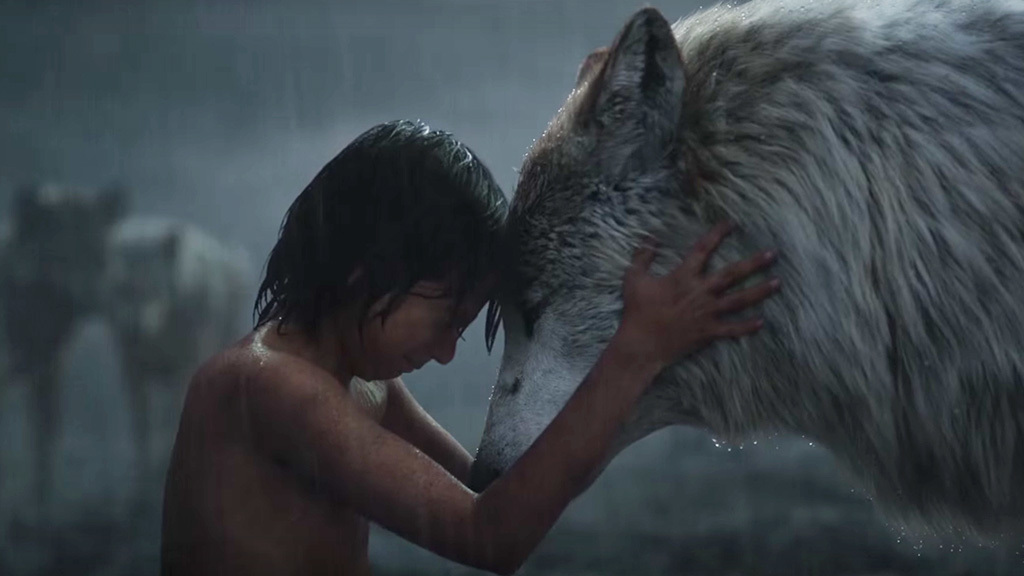 And like I said, the animals deserve some credit too. The animation here is superb and lifelike. It’s incredibly easy to forget that these beasts, especially Baloo and Bagheera are not actually real. They move so fluidly and every detail is so persistent throughout the film. If you look closely, you can see Bagheera panting with his tongue out like an actual cat would do, after a long chase scene. But this detail doesn’t just affect the main characters. It extends to every little bird or monkey or but that flies by. All of them give this jungle a rich, beautiful and often terrifying realism.

And therein lies one thing that might be a complaint of the film for some families but took the film to even greater heights for me. This film is often times very scary. Three characters in particular come to mind when I say this. Of course Shere Kahn is a monster and the animators as well as the voices of Idris Elba really make us feel as though this tiger is not to be trusted or liked. A scene in which he is found late in the night telling stories to the wolf pups has a very dark tension to it and I found myself hoping that nothing bad would happen to the pups. He’s a fantastic villain and anytime he’s on screen, you’ll be hoping that all the characters with him make it out alive. And sometimes they don’t.

Another terrifying scene, and possibly my favorite in the film, is that of Kaa. While Kaa has only one scene in the entire movie, and I wish there were more, it stands out as one of the best. From revealing Mowgli’s backstory through hypnosis to binding him up in her coils to saying “Trust in me,” just as she opens her big mouth to eat him, this scene is so insanely intense. It’s a slow build as Mowgli finds her shed skin some time before, and by the time she shows up, we’re already preparing for the worst. It says something that as soon as Kaa was off the screen, I instantly hoped for more of her. 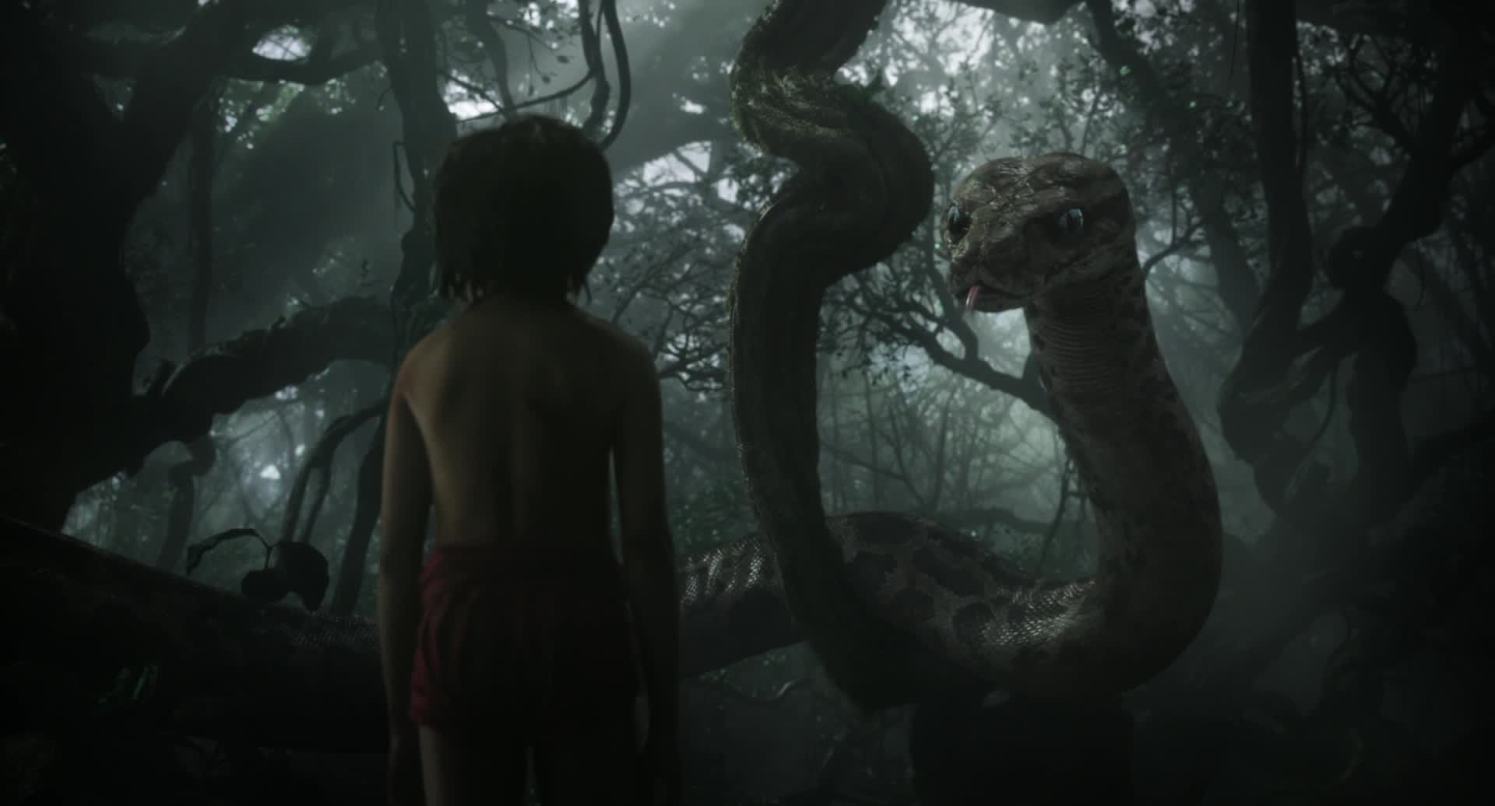 And yet, the most terrifying sequence has got to be the escape from Louie’s temple as Louie, who is ginormous in this film, chases Mowgli, breaking the temple as he goes. He bursts out from behind corners and grabs with his long arms and each time Mowgli just manages to evade him. It has the same sense of dread as a raptor attack in a Jurassic Park film and gets you jumping in your seat every time he bursts through a new wall or appears somewhere that we thought was safe.

Welp, that proves it. Monkeys are evil.

Now for the most spoilery part of the spoilers. I want to talk about the ending. I think it’s interesting that it was changed from the original Disney film, since so many parts of this film are taken straight out of the original. The decision to keep Mowgli in the jungle is actually a bit too perfect. By the end, I realized even I didn’t want him to go back to the man village. I just didn’t feel like he belonged there. It would, as the Baloo said, ruin him. I also think that the film really tells this story of making your own way and not conforming. Having Mowgli return after showing that he has his own road to follow, would feel a bit cheap. And of course, there’s the financial reasons to think about. After all, The Jungle Book 2 has already been green lit.

I have to do all of this crap again?

The message in the film might be scene as this idea of man vs. wild. But I don’t think that’s what director Jon Favreau wants us to see here. I think what he really means for us to see is the fact that we are all different. We all have our own path to follow and just because we were born different to our brothers, does not make us weak. It makes us strong. Being able to adapt and do things our way is something we all have to learn. “Don’t do it the wolf way,” says Bagheera. “Do it the Mowgli way.” That’s a great lesson to learn. Don’t live your life like everyone else. Be yourself and success will follow.

Shere Kahn knows how to make an entrance.

I could go on and on, but the simple fact of the matter is that I loved The Jungle Book. While writing this post, I even turned to my partner Carl and said, “Wow, writing this is making me love the film even more.” It’s beautiful and grand. The visuals are some of the best in Hollywood today and I never felt bored or mislead by the film. Every sequence tells a smaller story within a bigger story and all the characters are true to form representations of their originals. Baloo in particular gets more screen time than in the old film and this is a good thing because he’s hilarious and a bit manipulative, yet lovable at the same time. Of all the recent Disney Live Action adaptations, I’d even go so far as to say that this is the best. If you’ve just read all of this and still haven’t seen it, then get up, go to the theater and do it now! You’ll be glad you did.