The Long Journey Home from Disney

Today is going to be a little bit different post.  I’m going to appeal to you as human beings.  At the end of this post, I’m going to ask all of you to go out into the world and be better, and you’ll know why.  Yesterday we embarked on our journey home to New York City from Orlando.  The flight should have only been two hours long.  Due to a storm, our flight was delayed from 4:30 to 6:00 in the evening, with the promise that we would be arriving home shortly after 8:00.  From here, things went from bad to worse.

Our plane was crying too.

The flight was incredibly bumpy.  I know a lot of people tell you that they’ve been on rough flights, but this was by far the bumpiest flight I’d ever been on.  We were going through high intensity storms after all.  Somewhere over Washington D.C. things started to get increasingly worse.  This by itself was scary, but added to that were the children behind us crying and saying quietly to their parents, “I don’t wanna die, Mom.”  It was heart wrenching but also stomach churning.  The flight came in for the landing at Laguardia airport, our target destination.  The plane shook and the emergency exit signs came on.  This was not a good sign.  The pilot announced 2 minutes to landing, only to suddenly pull back up into the sky at the last moment.

It was too dangerous to land.  We circled the sky for about an hour.  For a while, we were told we would land in Syracuse, then Providence, until finally it was decided to land at the Bradly airport in Harford, Connecticut.  We strapped in and finally landed.  We sat on the runway for about an hour, while they searched desperately for a place for us to disembark the aircraft.  After all, we were not supposed to be here and several more planes that had been diverted were showing up by the minute.

At long last,we disembarked.  We were told that the plane needed to refuel and the weather needed to pass before we would head out again.  Several folks wanted to leave, and many did, finding their own way home.  The trouble was that most folks, us not included, had baggage in the cargo of the plane, and given that it was nearing midnight, there was no crew to move those bags.  This was where the real trouble began.  A man in the back of the line as we disembarked, the JetBlue associates desperately trying to figure out who was leaving and who was staying for the sake of their manifest, a man screamed to the front that they were holding us against our will and that they were to blame for the whole thing.  A completely untrue claim, but it served to rile the crowd up further. 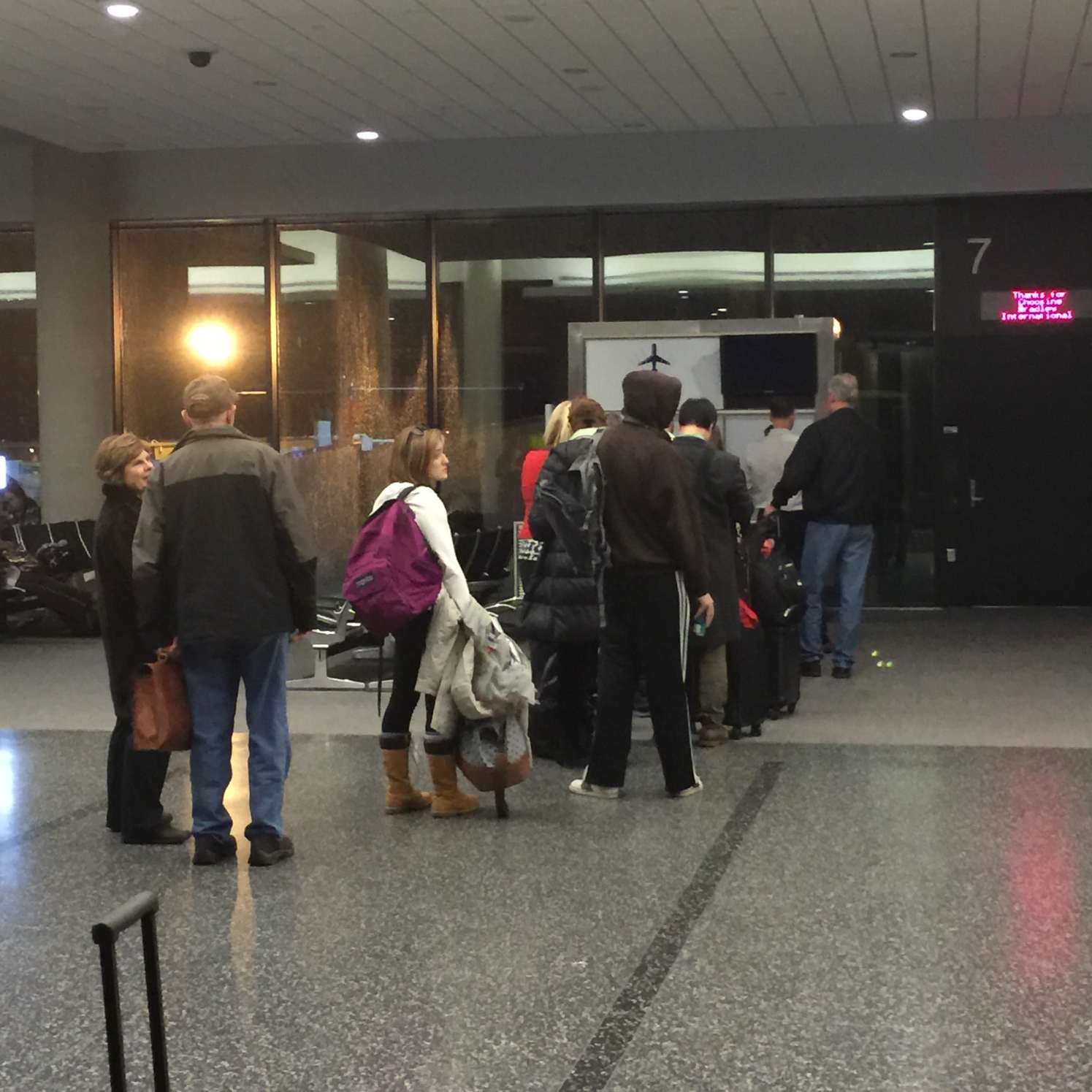 Folks across from us lining up for a new flight, that also never took off.

As the night went on, I found that people surprised me constantly.  Sometimes through their kindness, but more often than not through their selfishness and anger.  I understand.  This was a terrible situation, but were were all stranded.  All of us.  Yet so many people acted as if they were the only ones.  Them getting home mattered more than everyone else.  When one woman could not get the plane back into the air by yelling at every person who worked for JetBlue, she proceeded further into the airport, to yell at TSA.  Another older man yelled at the woman doing her best to get everyone settled and give us information as it became available.  One woman who spoke very little English, didn’t even understand that we had landed in Connecticut until we were off the plane and she had to call her husband who was waiting for her at Laguardia to tell him she was not there. 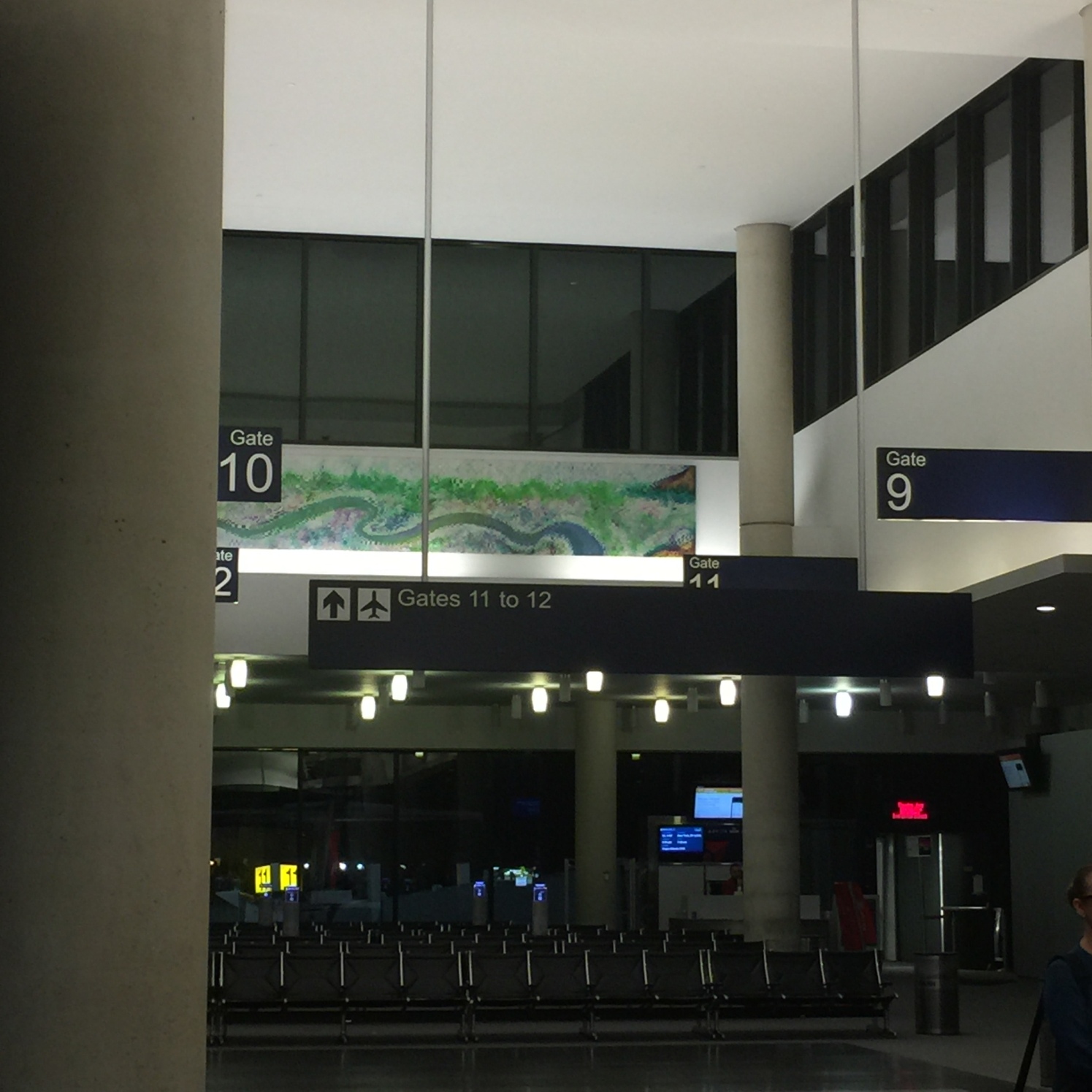 The airport was completely empty.

One gentleman was kind enough to order pizza for everyone.  It was one of the only acts of kindness or working together that we saw all night. From here we would be put onto another plane, only to have the pilot’s time that he was allowed to fly expire.  We had to get off once again.  More yelling.  We were told that buses had been ordered to take us to Laguardia, but that it would take them two hours to get there.  More yelling.  The buses never arrived and at long last, the offer was made to pay for our taxis back to the city.  More yelling.  At 7:30 AM, we boarded our taxi and promptly fell asleep as we were taken home, where we arrived around 10:30AM. 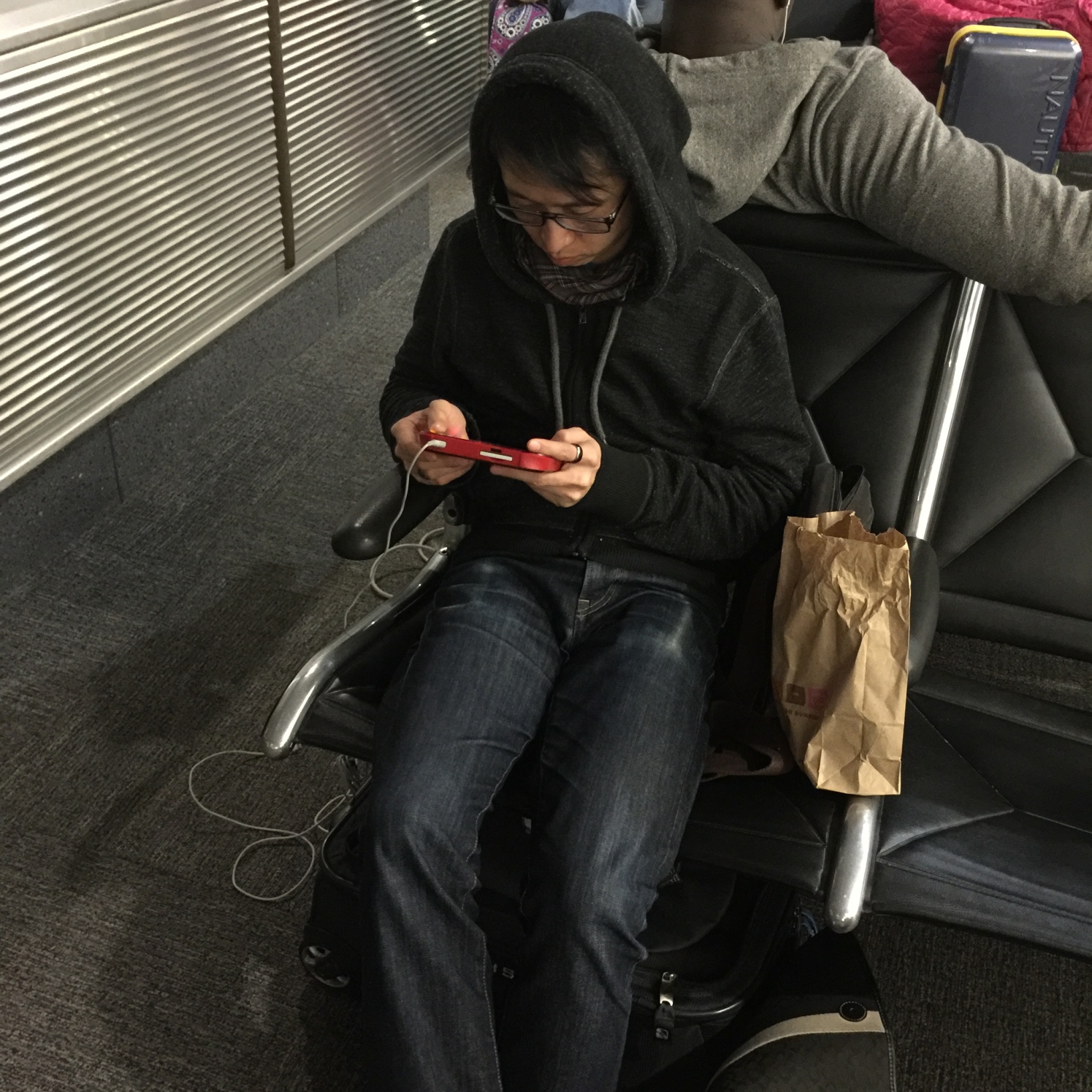 As for us, we spent the night playing video games and eating donuts, as Dunkin was the only place open.

There’s something to be learned here.  No matter how much anyone yelled, or fought or was rude, nothing changed.  The circumstances were just crap and everyone needed someone to blame.  If everyone had banded together, the evening could have gone smoother and could possibly even been an adventure.  I am proud to say that we remained calm and stuck by each other’s sides the whole night.  Sometimes, things just suck.  They just do.  When this happens, you get a pretty tough choice.  You can be the stronger person who buys pizza or makes someone smile or says “Thank you,” and “I understand you’re trying.  Let us know if we can help.”  OR, you can be the asshat who says “You stranded us and we demand you fix it right now, or else!”  Be the better person.  Your night and everyone else’s will go so much better.  I know it’s easy to be greedy and panic and worry, but know that this too shall pass and you are going to be okay, it might just take some time.

We are now home safe and have been sleeping off the events of the last 24 hours.  I will be back to happy, positive writing soon, but for now, I beg you, be the person who puts a smile on the faces of folks you encounter.  I promise your life will be better for it.